Evernote CEO Chris O'Neill called the partnership a "natural progression," even though Google has its own app, Google Keep, which directly competes with Evernote.

The beta integration is available on Chrome and Android, and it will be available on other platforms soon. Evernote also said this is "just the beginning" of even greater collaboration between Google and Evernote.

The news comes just a few weeks after Google announced updates to Google Keep, suggesting it wants to broaden its user base. At the same time, the company has been working on integrating Google Drive into third party applications like Yahoo Mail and WhatsApp. That kind of integration could help Google keep up with Drive competitors like Dropbox.

"We want anyone using Drive to have access to their content whenever and wherever they're trying to get stuff done. That's the cloud at its best," Alex Vogenthaler, group product manager for Google Drive, said in a statement Thursday.

Evernote, for its part, has gone through some turbulence in the past year, undergoing operating cutbacks and a change in leadership. Refocusing on its software and integrating with the likes of Google and Microsoft could help the note-taking and information collection service regain its footing. 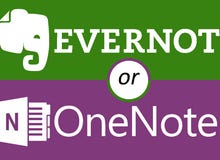 Microsoft, you have to take the gloves off Microsoft has a prime opportunity to provide OneNote as a compelling Evernote substitute -- if the company makes migration easy and seamless.
Show Comments
LOG IN TO COMMENT
| Community Guidelines