After decades of little progress, a new space race could be ignited, and that's good news for STEM advocates.
Written by Chris Duckett on Feb. 11, 2018 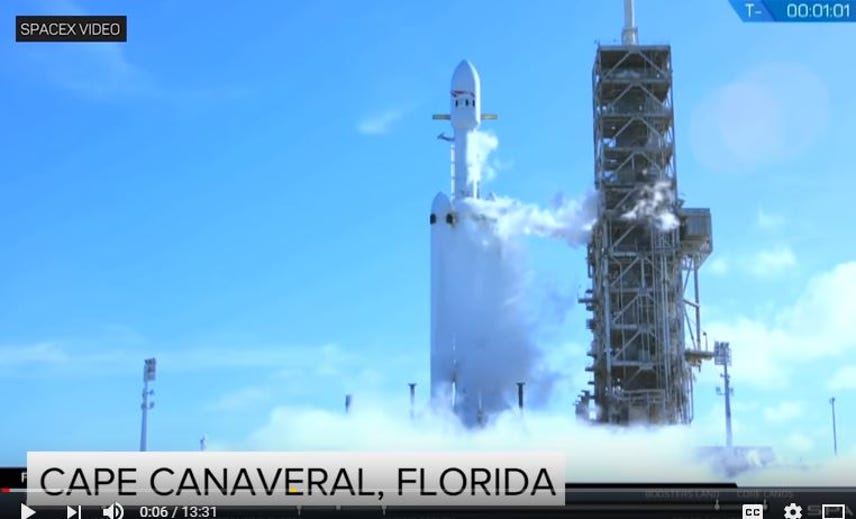 There is no shortage of valid reasons to be critical of the event -- it created a massive piece of space junk that will circle for millennia, it pushed the privitisation of space over the public good, it boiled down to a derivative giant ad for a car company that is missing its production targets on Earth -- however, the small step it represents could be the start of another space race.

The major firsts of space exploration were set in the original space race, and few major progressions have followed. Sending probes to other planets, putting up space stations, astronauts walking and driving on the moon, the first flight of the space shuttle -- all this is something that exists in archival footage for me, as someone about to enter the fifth decade of his Earth-bound existence. The advances I am aware of happening are Voyager 2 going to the ice giant planets, the Hubble space telescope, and SpaceX landing and reusing rockets.

If you want an explanation for why the Falcon Heavy launch has been so welcomed, on a thoughtful level, it is due to the success of a rocket that is in the same ballpark of the vaunted Saturn V, and it is a step towards the BFR, which would be a true advance in space.

On a lowest common denominator level, it's a car floating in space, and it hardly comes more accessible than that. It's stupid, it's wasteful, but it is also fit for all ages.

For all the effort that governments put into getting children interested in science and technology subjects, a tacky stunt like a cherry-red Tesla shot out to the asteroid belt is probably more inspirational and helpful for getting kids excited than attempting to explain the pure science and difficulty in completing something like the New Horizons visit to Pluto.

It would be preferable, and the discussion about marketing stunts would be mute, if NASA had completed the task, but public money vacated the field decades ago, and since that time there have been a procession of US presidents making promises to NASA but delivering little. The poor US space agency is unlikely to ever see the 4 percent of the federal budget spending it accounted for in the heady days of Apollo.

If the choice is the static status quo or having some tasteless private sector stunts on the path to trying to land humans on Mars, I'll take the latter.

As other space ventures look to emulate the success of SpaceX, and once again the boundaries of human space exploration are pushed, a new generation can be excited by it and not just have to view grainy archival footage.

Left in its wake should be an increasingly science-enjoying, engineering-inspired population, which is something the technology crowd has been pining after for years.