The entrepreneur says one million people sent safely to the planet can help us avoid extinction -- and has outlined how to do it.
Written by Charlie Osborne, Contributor on June 19, 2017 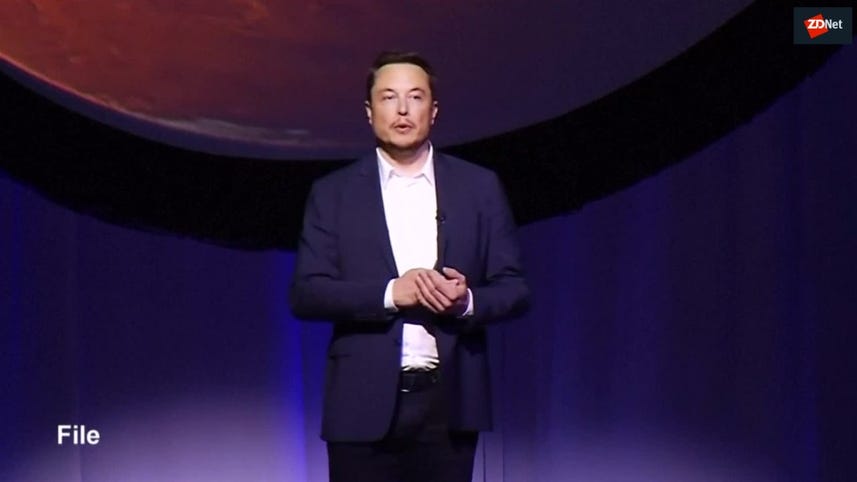 SpaceX CEO Elon Musk has claimed that building a self-sustaining colony on Mars is necessary to our future survival as a species.

The paper, a summary of Musk's presentation at the 67th International Astronautical Congress in Guadalajara last year, suggests that a future Doomsday event will force us to look at other planets to stave off extinction.

Out of all the options currently open to us, Venus is a cooking pot of pressure and acid, Mercury is too close to the sun and the planet's moons are difficult to reach, and our own moon is small and has no atmosphere.

Musk argues that Mars, despite the distance, is the best option -- especially if we are able to warm the planet up to thicken the atmosphere and access the planet's frozen oceans.

With a day and night cycle similar to our own planet, we may also be able to cultivate plants as the atmosphere is primarily CO2, nitrogen, argon, and a few trace elements.

"It would be quite fun to be on Mars because you would have gravity that is about 37 percent of that of Earth, so you would be able to lift heavy things and bound around, furthermore, the day is remarkably close to that of Earth," Musk says. "We just need to change the populations because currently, we have seven billion people on Earth and none on Mars."

The cost of such travel, however, must come into the equation. It is estimated that sending a single person to Mars could cost up to $10 billion at the moment. To create a self-sustaining community, the cost must be significantly reduced, as very few people could afford to join the project.

Therefore, Musk wants to eventually reduce the cost to the average price of a house in the US -- roughly $200,000 -- but in order to reach this goal and slash the expense by five million percent, a number of steps will need to be taken.

Musk says that the so-called "interplanetary spaceship" used to get to Mars would need to launch with fuel tanks that are basically empty in order to refuel while in space to keep costs down.

It will also be necessary to make the tankers and rockets reusable at least for a few return trips and to create propellant on Mars rather than make constant trips back and from Earth for fuel.

The executive says that due to Mars' atmosphere and elements already available, it is possible to produce the methane and oxygen required. Kerosene will not work without oil reserves on the planet and methane is cheap enough.

"It would be pretty absurd to try to build a city on Mars if your spaceships just stayed on Mars and did not go back to Earth," Musk writes. "You would have a massive graveyard of ships; you have to do something with them."

The Raptor engine and rocket booster, used in the spaceship, are some of the most challenging elements of the Mars vision.

Not only will the Raptor engine be the "highest chamber pressure engine of any kind ever built," but the full-flow combustion engine will need to condense oxygen and methane for fuel, have capacity for 100 passengers, and multiple ships will need to leave Earth during each launch window to Mars to shuttle one million people to the Red planet in a matter of decades, rather than centuries, to make colonization a success.

The ship's characteristics are described below:

The rocket will also need to be extremely powerful and far beyond what we have produced so far.

"We are talking about a lift-off thrust of 13,000 tons, so it will be quite tectonic when it takes off," Musk writes. "This is really intended to carry huge numbers of people, ultimately millions of tons of cargo to Mars."

SpaceX hopes that with engineering and research over the coming years, the cost to reach Mars could eventually be reduced further to $100,000.

The executive is intentionally vague when it comes to timing in the paper, but Musk hopes to complete the first development spaceship in roughly four years. At that point SpaceX will begin testing the ship in suborbital flights.

"If things go super-well, it might be in the 10-year timeframe, but I do not want to say that is when it will occur," Musk says. "There is a huge amount of risk. It is going to cost a lot. There is a good chance we will not succeed, but we are going to do our best and try to make as much progress as possible."