Full Bio
Posted in Between the Lines on November 20, 2017 | Topic: Innovation 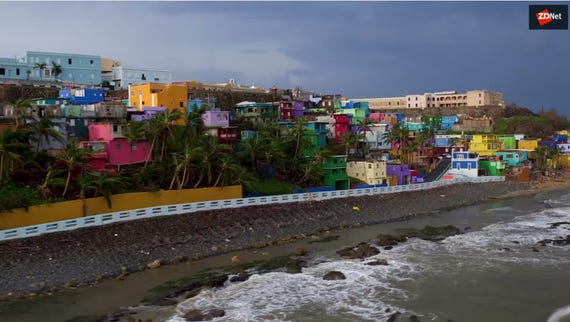 The US Federal Aviation Administration (FAA) has approved the use of drones to act as mobile cell phone towers in the ravaged area of Puerto Rico.

Close to two months after the Caribbean island was struck by Hurricane Maria, buildings remain in tatters and there is still a lack of cellphone reception, electricity, and online access.

Residents are able to apply to the Federal Emergency Management Agency (Fema) for assistance, but as reported by The Guardian, there is no longer an infrastructure available which allows citizens to do as much as make a phone call or fill out an online form.

Without what we now often consider basic services in the West, residents have been left, in many accounts, stranded without a means to access help.

This is where a squad of Flying Cows may be able to assist.

Last week, the FAA said that the federal agency has approved the use of the Flying Cow (Cell on Wings) as an interim method to provide a cellular network on the island while repairs take place.

AT&T's Flying Cow is a "cell tower in the sky," according to the company, which has been designed to "beam LTE coverage from the sky to customers on the ground during disasters or big events."

The telecommunications giant says the drone carries a small cell and antennas and is connected to the ground by a tether which provides power and a fiber data connection. As the drone is powered via the ground it is able to remain in the sky indefinitely.

The drone then connects to satellites to facilitate the transfer of calls, texts, and data.

AT&T's Flying Cow is potentially able to fly at altitudes of over 300 feet and provide coverage of up to 40 square miles. Multiple drones can be used to increase coverage.

"The Flying COW can operate in extremely remote areas and where wired or wireless infrastructure is not immediately available," AT&T says. "The Flying Cow is an exciting next step in how we're using drones to bring strong wireless connectivity to those who need it most."

As the drone, which resembles a helicopter, surpasses the FAA's 55lb weight limit imposed under the US agency's small drone rules -- which permits smaller devices to operate on condition they are registered, do not fly over people, and must fly only during the day, among other rules -- the FAA has made an exception to allow AT&T to create the drone-based mobile network.

"The company is using the drone as a temporary cell service solution while it rebuilds the permanent infrastructure on the island," the FAA notes.

The exception was made on 5 November and it is hoped the drones provide a temporary backbone for the island as recovery efforts take place. With communications back in order, the disaster recovery efforts may improve in speed and efficiency.

Opinion: The researcher has discarded $30,000 to ensure there is full public disclosure of the drone maker's poor security and revealing how not every bug bounty hunt ends well.

Unmanned aerial vehicles are heading to heading to damaged areas in unprecedented numbers.

Watch: This flying drone folds its wings and dives into the sea, then relaunches itself

There's some cool science happening around multidomain robots, which are built to traverse multiple environments.