Elizabeth (Beth) Mauder is an associate video producer at Red Ventures. She graduated from Indiana State University with a Bachelor of Science Degree in Communication with focuses in Mass Media and Journalism, and a Nonprofit Leadership minor. 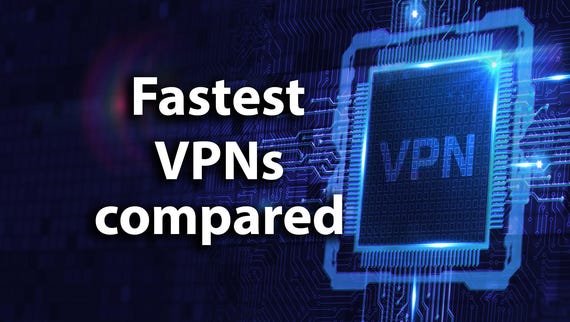 Choosing a VPN can be a little bit of a chore. First, you're going to need to research and figure out which VPN is going to work for you. Then you're going to want to go through a trial run. But then the real test comes, you need to see how fast that trial goes with your internet once the VPN is set up to your machine and your network. Beth Mauder sits down with David Gewirtz to talk about the research and legwork David has done to come up with the fastest VPN on the market.

Watch my conversation with Gewirtz above, or read a few of the highlights below.

The fastest VPN: NordVPN, Hotspot Shield, and ExpressVPN compared We don't just test VPN provider performance in this in-depth analysis. We go out onto the internet, gather performance data from all across the web, and let you know which provider is the best overall.

Beth Mauder: Why don't you go ahead and walk us through what those tests look like?

From my set of tests, and I tested five VPNs over the course of about two weeks, I started with a raw Windows install, so that everything was consistent across each individual test. And then for each install, what I would do is do tests to a variety of countries, and when possible, repeat the vendor, the ISP in each of those countries. So I tried India, and Sweden, and Taiwan, and Russia, and either Australia or New Zealand, and tried to get out to those countries for each of the VPNs I tested. And then tested upload speed, download speed, and latency and ping time.

I also tested how long it takes to establish the connection because it turns out that some of them take quite a bit longer to connect to the VPN than others. And that can get annoying, especially if you're connecting on and off in different places. So that was the sum total of the test. So what I did is I repeated them three times for each test, and then I averaged the results to try to get some level of consistency. And it's a pretty rote process. You just set it up and you run the tests and you record the numbers and put them together into, in my case, a big spreadsheet, which then got turned into charts, which were a lot more fun.

Beth Mauder: David, after all of your testing, what were some of the fastest VPNs you can currently get?

David Gewirtz: So I was very surprised. The fastest VPN for download that I found was a product called Hotspot Shield. And what surprised me about Hotspot Shield is they were very hypey in their promotion. They were the kind of company that you didn't expect to live up to their promises because they were just so full of words, "The best, we're the greatest, love us, best thing since sliced bread." It turned out they were substantially faster. And actually, most of my performance to other countries was faster than it was with a direct connection to the other country. So that was an outlier. I was very surprised by that. Then we had CyberGhost was pretty quick. NordVPN was quick. Then StrongVPN and IPVanish wrapped up the set of the five that I did in my own testing.

And I also aggregated tests from around the internet. And that gave me a much better picture. And I'll talk about that in a second. But from my own personal tests of those five, Hotspot Shield, CyberGhost, and NordVPN were the fastest for download speeds. In terms of ping time, CyberGhost and  NordVPN were the winners for how long it just took to send one signal to the remote site and get it back. That's what ping time is. It's I touch that site, I get back a response, and that's a very quick response. And then time to connect, NordVPN and CyberGhost were slowest, and Hotspot Shield, IPVanish, and StrongVPN were the fastest.

Beth Mauder: So you said you looked at other sites too, and you aggregated data from elsewhere. Were your tests confirmed? Did you look for something else? What'd you find?

David Gewirtz: One of the things I did was I looked at 10 sites besides ZDNet, and most of them had lists of their top 10 or so VPNs. I eliminated anyone that only had one VPN reviewed or two VPN review because I wanted to see performance across the world. And the purpose of looking at these sites was that every testing, every site that did these tests was in a different location doing different performance. So if we were able to look at each of these different sites, and then see what was consistent across all their results, we'd get a better picture. So what we found was that ExpressVPN, NordVPN, and Hotspot Shield were the top three across all of the sites we looked at. But what was interesting was what's called the standard deviation, which is the difference between the results, your how many highs and how many lows you have.

It turned out that NordVPN's difference was very low. They were mostly ones and twos, where Hotspot Shield had a bunch of ones and a bunch of sixes. So what that tells me is that that performance is consistent in certain locations, but not consistent in other locations. And the same applies to a few of the others. So what we found was that if you're looking for the truest, most consistent set of results across all 10 plus ZDNet sites, then NordVPN was the fastest and the most consistent. If you're looking for what was just the fastest, but not as consistent across all the test points, then Hotspot Shield showed up pretty well as did  ExpressVPN.

So from that, what do you take out of it? Well, the fact is almost all of these companies have 30 to 45-day money-back guarantees. And the reality is your mileage is going to be different from everybody else's. Your mileage may vary. So what you really need to take out of this is you need to test it in that 30 to 45 days and find out how it performed for you, especially if you're just at home and you're working from home, then that's easy. But if you're traveling between home and office, or you're going to your favorite coffee shop, if they still exist, or you're going to the airport and you're allowed to do that, you should test in those environments because that's the kind of environment you're working in, and see whether you're getting the numbers you need. Because really, the bottom line is what our tests can eliminate, you're having to look at the 500 VPNs out there and narrow it down to, say, three or four to start with. But you should check those three or four for what works best for you.

Beth Mauder: Anything else, David?

David Gewirtz: I would say that things to look at, and if you're looking at choosing a VPN, you want to look for a VPN that has something called a kill switch. What that means is, is that if the VPN ceases to function, it doesn't just let your data go out. What it does is it shuts off your internet connection. That's a really important thing to keep in mind. Because again, if you're in a coffee shop somewhere and the VPN itself quits for some reason, without the kill switch, now your data is free and open to go out to everyone. What you want is to have it decide, "I don't have a connection. I am just going to shut you on down." And that way, you're careful about that. Other things to keep in mind are what you're using the VPN for. Are you using it just to protect your login information? Or are you using it because you're concerned about stalkers or you're an activist or something like that?

If you're just protecting your own information and you're in a coffee shop, then most of these VPNs will do fine for you. If you are using the VPN to protect your life, then you need to do additional research. No one of these articles will be enough. You need to go onto forums. You need to go to groups that are like you to see what they say and what they experience. Because many people, well, not many people, but a significant percentage of people use VPNs to protect their lives in certain ways. And for that, be more serious than just reading one review.