FBI Director James Comey has compared Chinese hackers to a "drunk burglar" — not so subtle, but prolific and reckless enough to cost US companies billions each year.

On Sunday, the 51-year-old, who is serving for 10 years as the law enforcement agency's director, labelled cybercrime an "epidemic" caused by people worldwide connecting their lives so closely to the Web.

Speaking on CBS' "60 Minutes," Corney implied that a number of countries are trying to break into US networks frequently, but the Chinese are at the top of the list.

When asked what a typical day looked like for law enforcement concerned with cybercrime, Corney likened the problem to an "evil layer cake," — the top layer full of nation state actors, organized cyber syndicates and terrorists trying to break into US systems; "down to hacktivists, down to criminals and pedophiles."

In relation to the Chinese, Corney said these alleged cybercriminals are "extremely aggressive" and "widespread" in efforts to break into US computer networks. But why do so at all? According to the FBI's director, intellectual property is at the heart of such efforts. Corney said:

"They steal information that will benefit their industry. [They are trying to get] Information which is useful to them; so they don't have to invent — they can copy or steal, or learn about how a company might approach negotiation with a Chinese company — all manner of things."

However, this wasn't all the director had to say in his first interview broadcast. 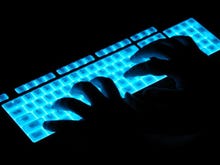 Despite such widespread hacking activity, Corney said that successful network compromisation isn't down to the skill of Chinese hackers — but rather how prolific they are.

"I liken them a bit to a drunk burglar. They're kicking in the front door, knocking over the vase, while they're walking out with your television set. They're just prolific. Their strategy seems to be: 'We'll just be everywhere all the time. And there's no way they can stop us,'" Comey commented.

China and the US have continually accused each other of cybercrime and hacking attempts. Earlier this year , the US charged five Chinese men dubbed "military hackers," accusing them of conspiracy to hack into US organisations to steal trade secrets. A 31-count indictment alleged the men broke into solar and nuclear technology companies in order to gain a competitive advantage.

China has denied such allegations, and instead accused the US of "hypocrisy" in light of Edward Snowden's disclosures concerning the spying activities of the National Security Agency (NSA). The country's defense ministry said:

"From 'WikiLeaks' to the 'Snowden' case, US hypocrisy and double standards regarding the issue of cyber security have long been abundantly clear."

According to the FBI director, Chinese hackers and network infiltration costs US businesses billions every year.