In doing so, the telco receives the court's seal of approval to install 1,800 more payphone cabinets across Australia.
Written by Campbell Kwan, Journalist on March 9, 2020 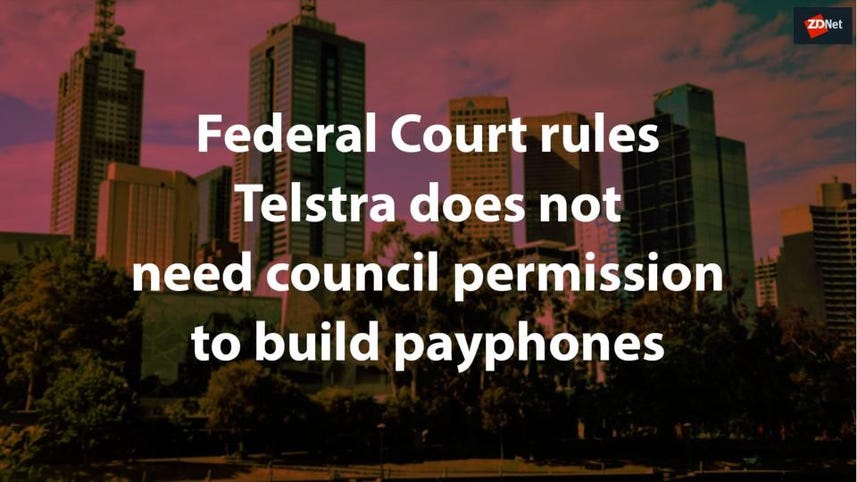 Telstra is allowed to build new payphone cabinets across the country without needing to gain permission from city councils, the Federal Court has ruled.

Under Australian law, payphone cabinets are considered as a fundamental need for the public, meaning telcos can build them without council approval so long as they are defined as "low-impact facilities".

In November 2018, Urbis Pty Ltd, as Telstra's agent, made applications to build 81 payphone cabinets in Melbourne, as well as application to allow for promotional signage on these cabinets. These applications were refused by Melbourne City Council due to its belief that the cabinets were not "low-impact facilities".

Due to this claim, the council raised an action against Telstra arguing that the telco requires council permission to build its new payphone cabinets. The payphone cabinets in question, are updated cabinets that provide mobile phone charging, Wi-Fi access, and information and advertising display.

Justice John O'Callaghan disagreed with the council's submission however, saying that the criteria for "low-impact facility" speaks to the functions of the payphone cabinet at the time of its installation, rather than the future intentions of the carrier, even if that is to eventually use the cabinet for commercial advertising.

The Federal Court judge distinguished that while displaying third-party advertising requires council approval, the actual installation of the payphone cabinet itself would not.

"Telstra emphasised that it will not and cannot display commercial advertising on any new payphone cabinet unless and until it secures planning permission from a relevant local authority to do so," O' Callaghan said.

Prior to Melbourne City Council raising the court action, Telstra had already installed 34 new payphones in Melbourne in 2018.

"A concern has been raised about the size and location of our new payphones. We acknowledge there has been a small increase in size, mainly to accommodate the fibre connections and other equipment required in a modern smart city, all collocated within a considered design to minimise street clutter," Telstra media general manager Pete Manwaring said at the time.

With the outcome, Telstra intends to move forward with its plan to install 1,800 new payphone cabinets throughout Australia and for promotional signage at its cabinets in Sydney and Brisbane.

Telstra aims up at 50% emissions reduction by 2030

Another Australian corporation going much further than the federal government.

Australia's former monopoly telco looking for NBN to pick up the slack as it wants to step back.

Telstra to roll out RPKI routing security from June 2020

BGP RPKI routing security has been rolling out steadily across Asia and Africa, while Australia's biggest telco has been lagging. But not for long.

Coming off the back of a horror full year, Telstra's value brand is picking up the slack.