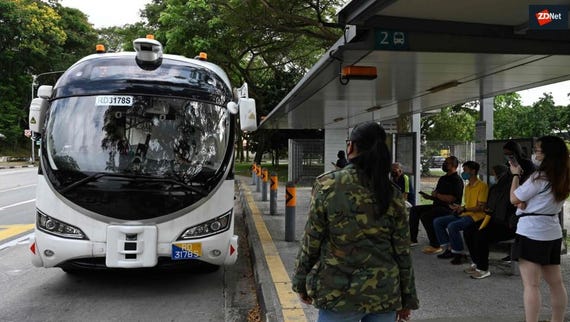 Commercial autonomous bus services have been rolled out for the first time in Singapore, running two routes at Singapore Science Park 2 and Jurong Island. They will operate during a three-month trial during which data will be collected to assess the viability of the on-demand service as well as passenger safety and service reliability and efficiency.

Development of the project involved multiple organisations and government agencies, with the aim being to drive and accelerate sustainable deployment of robotics in the country. Led collectively under the Alliance for Action (AfA) on Robotics, the initiative also was facilitated by the Economic Development Board and Land Transport Authority.

The AfA itself was brought together by the Emerging Stronger Taskforce, established by the government to review how Singapore could stay economically resilient and tap new areas of growth amidst the COVID-19 pandemic.

Singapore wants widespread AI use in smart nation drive With the launch of its national artificial intelligence (AI) strategy, alongside a slew of initiatives, the Singapore government aims to fuel AI adoption to generate economic value and provide a global platform on which to develop and testbed AI applications.

The autonomous buses deployed in the trial were developed by ST Engineering, while the mapping programme used to guide the vehicles was built by GPS Lands. Public transport companies SBS Transit and SMRT will operate the service routes in Jurong Island and Science Park 2, respectively.

The AfA said in statement Monday that the pilot was expected to end April 30 and it would assess the findings before deciding on the next steps. "In order to gain more data and insights that will be valuable to the development of future urban mobility services, the two routes differ in physical conditions, commuter and partner mix, service and vehicle type, as well as operation concepts," it added.

Insights from the Science Park 2 service, for instance, would help determine whether an on-demand bus service was better able to meet the transport needs of tenants in the area during off-peak hours, when public transport ran at a lower frequency. Running on weekdays from 10am to 5pm, this service route aimed to offer greater convenience for passengers travelling from Science Park 2 to Haw Par Villa MRT station, the AfA said.

Autonomous minibuses, each 7m long and with seating capacity of 10, plying this route can be booked via the Zipster mobile app, which was developed by SMRT's subsidiary, mobilityX.

The Jurong Island route, covering 10 stops, will run on a fixed schedule from 1130am to 2.30pm on weekdays to cater to lunchtime commute. Serviced by a 12m-long bus with seating capacity of 26, this route aims to offer workers easier access to amenities at Oasis@SAKRA. Passengers here would have to use the SWATRide app, developed by SWAT Mobility, to pay for their rides.

The AfA said it has also been working with trade unions to create training and reskilling for bus captains, who then would be able to take on new roles such as managing commuter experience and the autonomous bus management system.

Autonomous vehicle pilots have been running on Singapore roads since 2015 and included a 2019 public trial on Sentosa, which was jointly conducted by ST Engineering and the Ministry of Transport and Sentosa Development. This three-month pilot ran "without incidents" and served some 6,000 passengers.

The government in 2019 released a set of national standards to guide the local industry in the "safe" development and rollout of autonomous vehicles, outlining guidelines related to vehicle behaviour, functional safety, cybersecurity, and data formats. Called Technical Reference 68 (TR 68), the standards are aimed not only to ensure safety but also to provide a foundation for data interoperability and cybersecurity.