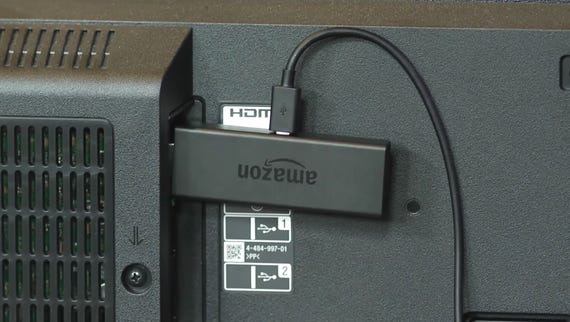 The small box sits next to your TV set and is capable of controlling your TV, a sound bar, and a cable box should you have one.

Amazon sent me a Fire TV Cube to review, but I've only had the device for few days during which time software for apps and services, along with the device itself, was still being finalized. I don't feel like I've had near enough time with the final product to draw any meaningful conclusions, so I opted instead to offer some of my first impressions of the $119 streaming box.

Losing the remote to a streaming device is frustrating, and that's kind of where the Fire TV Cube wants to make a place for itself in this increasingly crowded market. But doing things like scrolling, for example, isn't usually something that users can do with a voice command on things like the Apple TV.

With the Fire TV Cube, you can. Commands such as scroll up/down, or switch to HDMI 1/2/3, along with controlling the volume level are all possible with nothing more than your voice. It's going to take some getting used to, but this is just cool.

What's most impressive to me so far is how well the Fire TV Cube can hear users, despite being in close range to my TV's speakers. Normally with an Echo device, it is functioning as a speaker and listening device. With the Cube, it has no idea what's playing through the speaker of a soundbar or TV and has to actively differentiate between the sound coming from a movie or TV show and potential commands from a user.

To help the Cube achieve this, Amazon recommends placing it one to two feet away from any speakers or sound bars. Thanks to a really short HDMI cable and a TV stand without a lot of room on either side, my Fire TV Cube is probably closer to 9-inches away from a speaker. Even still, the Echo portion of the Cube had no issues waking up on command and listening to me.

With the Cube accepting voice commands and remote control input, I was curious about how the interface would change -- if at all -- depending on input method. When using voice commands to search for shows, I am presented with a series of large cards. Each card has a number, and instead of telling Alexa "Play show XYZ" I can say "Play number 4."

However, if I were to hold up the remote and interact with Alexa through it, the Fire TV Cube uses the standard Fire TV interface with smaller cards and no numbers.

It's hard not to recognize the overall influence the Echo Show had on the Fire TV Cube. Asking for things like weather uses the TV screen to display the forecast, or asking for a flash briefing will use a mixture of audio and video.

So far my favorite Echo Show-like feature is widescreen Jeopardy. I'm not very good, but it's still fun!

Join Discussion for: 4 first impressions of the Fire TV Cube