Usually under fire for its drilling fluids, hydrofracking for natural gas raises a new concern. Researchers speaking today at a Geological Society of America meeting say it might disturb uranium deposits within shale.
Written by Melissa Mahony, Contributor on Nov. 1, 2010 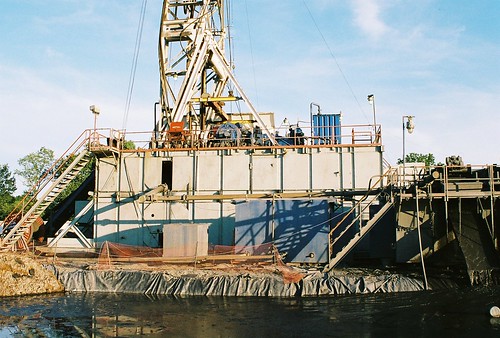 Researchers are raising another concern to the controversial practice of hydraulic fracturing: uranium contamination.

"Hydrofracking" or "fracking" is usually criticized for the often undisclosed chemicals it uses during the process of injecting water and sand into natural gas wells at high pressure. This is done to fracture tight shale formations and release the natural gas. That the chemicals may leach into groundwater is the main concern, and something the EPA relaunched an investigation into recently. Just last week, Pennsylvania Governor Ed Rendell banned fracking on state land (though most occurs on private land in PA).

Groundwater is also on the minds of a team of geologists from the University of Buffalo, but in regard to uranium contamination. Scanning shale surfaces taken from Pennsylvania and western New York, they created a chemical map of the rock revealing that its uranium and hydrocarbons were located together.

We found that the uranium and the hydrocarbons are in the same physical space. We found that they are not just physically but also chemically bound. That led me to believe that uranium in solution could be more of an issue because the process of drilling to extract the hydrocarbons could start mobilizing the metals as well, forcing them into the soluble phase and causing them to move around.

Experimenting with some drilling fluids used in the industry, they found that they did react with uranium, in their lab. How much, if any, uranium fracking releases into the environment isn't known. Bank calls for a greater understanding of the metal's presence in shale in order to accurately assess how mobile the metal might become. She said while the uranium wouldn't pose a radiation threat at these levels, it is still very much a toxin.