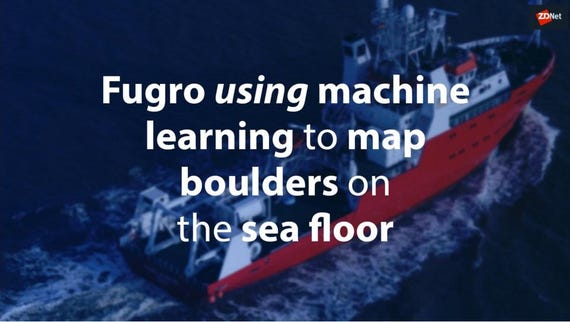 Geo-data firm Fugro collects and analyses information about the Earth and the structures built upon it. It surveys the land and in the case of mapping objects on the sea floor, Fugro uses side scan sonar, collected via boats, to gather information.

One project sees Fugro search the sea for boulders to help its customers determine whether they can set up an offshore windfarm.

"Windfarm companies want to know where the impediments and where the potential sites they can build windfarms are," Fugro senior innovation engineer Marcus Nepveaux said, speaking at AWS re:Invent in Las Vegas.

"So we go in, we map the sea floor for them, tell them where the big rocks or the little rocks are … they may be as small as a foot, and as big as we can detect."

Fugro helps customers determine what's on the surface before they go ahead and install wind turbines. It collects the side scan sonar images -- essentially an audio signal -- which returns an image that displays acoustic shadow.

In the image Nepveaux showed during his presentation, the darker portions that he said were high audio feedback to the sonar receiver and the iridescent acoustic shadow showed where the sound did not get a response -- an acoustical void that helps indicate whether there are boulders in a location.

Typically, the sensors capturing the information travel six to 10 meters above the sea floor.

Fugro completely customised an algorithm within Amazon Sagemaker and trained its own Docker image on GPUs.

"We use the TensorFlow-based image, backed by GPU … if you start a Sagemaker GPU instance, it already has Nvidia Docker installed on it so that's very handy. When you build this container to run on a GPU-backed system, it makes it very easy. What we had to do is build custom data readers, really just reading images out of Amazon -- very simple," he said.

"This system is boulder and not boulder.

"We're hoping to convert weeks and months to work to just a couple of days.

The algorithm has returned in excess of 100,000 positive identifications of boulders.

"Some of these images that have come through, and the images vary depending on which -- we have teams in different parts of the world and they all seem to work a little differently ... but some of them we've seen come back with 120,000 boulders. So we do tend to try to tweak the model so that it favours false positives versus false negatives," Fugro senior innovation engineer Michael Venable said.

While the first phase of this relatively new project is looking at boulders deep on the seabed, Venable said the second phase will see the company map the formations that lay just under the sea floor.

"The phase that we're in right now is sort of verifying -- they want to run some data and they want to look at the results," Venable said.