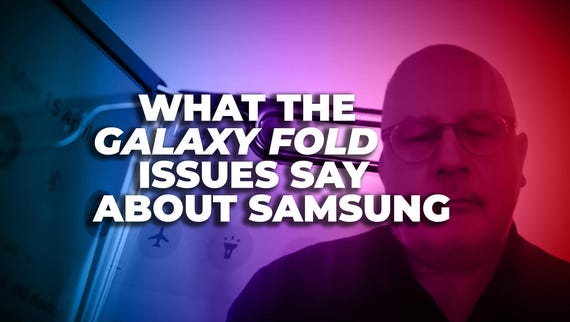 Following on from the sudden delay of the Chinese launch of the Samsung Galaxy Fold, a report claims that the company has now delayed the launch worldwide.

Also: iPhone battery draining fast after installing iOS 12.2? Here how to diagnose the problem and get more battery life

According to The Wall Street Journal, Samsung has delayed the launch of the Galaxy Fold "until at least next month" as the company investigates multiple claims from early reviewers that the folding screen broke after only a day or so of usage.

Mark Gurman of Bloomberg and Steve Kovach of CNBC kicked off the claims by posting photos and video of their broken review units on social media.

Gurman did remove the protective layer from the display of his review unit (which looks like a screen protector), so this may have contributed to, or maybe even caused, the issue.

YouTuber Marques Brownlee also accidentally removed the protective layer, and claimed that the display "spazzed and blacked out" while he was peeling it off.

Dieter Bohn of The Verge even posted photos of how the hinge has damaged the display.

"A limited number of early Galaxy Fold samples were provided to media for review. We have received a few reports regarding the main display on the samples provided," wrote a Samsung spokesperson in response to the initial claims. "We will thoroughly inspect these units in person to determine the cause of the matter."

We recently unveiled a completely new mobile category: a smartphone using multiple new technologies and materials to create a display that is flexible enough to fold. We are encouraged by the excitement around the Galaxy Fold.

While many reviewers shared with us the vast potential they see, some also showed us how the device needs further improvements that could ensure the best possible user experience.

To fully evaluate this feedback and run further internal tests, we have decided to delay the release of the Galaxy Fold. We plan to announce the release date in the coming weeks.

We value the trust our customers place in us and they are always our top priority. Samsung is committed to working closely with customers and partners to move the industry forward. We want to thank them for their patience and understanding.

The Galaxy Fold launch was scheduled to be launched in the US on April 26.

Updated to add statement from Samsung.