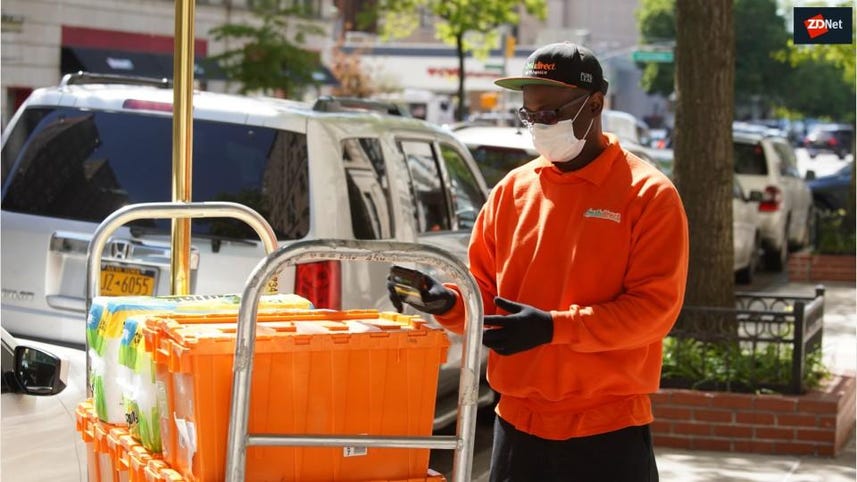 A leading online grocer is teaming up with a company pioneering the use of robots and small micro-fulfillment centers to bring ultra-fast grocery delivery to the nation's capital. The partnership between Fresh Direct, which operates grocery deliveries in the northeast, and Fabric will rely on robotic micro-fulfillment to push the speed envelope in the red hot delivery race.

Early last year I wrote about the hazy state of the on-demand grocery delivery market, which has only recently emerged but by any measure will be enormous.

It's hard to find a clear assessment of the impact online grocery delivery is having both on grocers and consumers. The online grocery paradigm is taking shape very quickly, but aside from hodgepodge delivery numbers and mind-boggling market reports predicting a market in excess of $100 billion, the state of the industry is a little uncertain.

Lockdowns and public-exposure concerns related to COVID-19 are only quickening the move to online grocery delivery as legacy players like Kroger team up with robotics firms and newer players like FreshDirect streamline their online-native operations. Headquartered in the Bronx, the grocer uses a hub-and-spoke operational structure and relies on data to move products from primary facilities to local facilities for end user delivery.

Micro-fulfillment is an extension of the model. By placing automated fulfillment centers near end-consumers as opposed to in massive warehouses located outside cities, which how fulfillment currently works, Fabric believes it can deliver on a winning combination of speedy delivery, cost reduction, and scale of operations.

"FreshDirect is the pioneer of grocery e-commerce in the United States," said Elram Goren, Co-founder and CEO of Fabric. "Now with Fabric's robotic micro-fulfillment technology, purpose-built for on-demand fulfillment, they are positioned to best serve their Washington D.C. customers profitably and at scale. We are thrilled to announce this strategic partnership as one of the first steps in Fabric's continued expansion across the United States."

In October 2018, Fabric launched the world's smallest automated fulfillment center, and today the site processes up to 600 orders a day out of just 6,000 square feet, far smaller than most fulfillment centers. Fabric also recently announced the buildout of an automated grocery site with three temperature zones, the first of a 12-site deal in partnership with one of Israel's largest grocery chains.

The company's model of partnering with existing brands is now helping it gain a stronger foothold in the U.S., which is rapidly embracing grocery delivery.

Which metal detectors actually work and how much should you spend?

Which metal detectors actually work and how much should you spend?