As the buzz around Google's Glass cools off in the face of other wearables like smartwatches, Google has made its connected eyewear available to anyone in the UK through the Google Play Store.

The beta Explorer Edition of Glass went on sale at a dedicated site for Glass in the UK this June , but this week the company expanded its distribution to the Google Play Store under the Devices tab, where it also sells its much more affordable but less experimental Nexus phones and tablets. It similarly made Glass available in its US Google Play store last week. 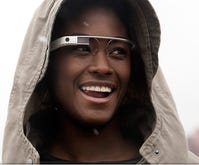 10 things about Google Glass: Could this be Google's iPad?

Here are 10 things to know about the Google Glass program for developers, consumers, businesses and everyone interested in the search giant's next big thing.

In both stores, Glass is available for the same price it was previously — $1500 in the US and £1,000 in the UK — only now would-be Glass wearers don't need to register, so in a minor way it lowers the barriers to acquiring one. The bigger barrier of course is the price.

While in the US, Glass was limited to developers until around April — supplies permitting — in the UK it was available from day one to anyone interested in signing up. The UK launch was supported by a new Glassware app from The Guardian. Google also opened up a Glass Basecamp centre in King's Cross in London where buyers can go to get fitted for the networked eyewear.

Glass sets are now shipping with Android 4.4 XE16.0 and up, a tiny display, a five-megapixel camera and 720p video. It offers wi-fi and Bluetooth connectivity and comes with 12GB usable memory synced with Google cloud storage. The device also needs the MyGlass companion app for either iOS or Android.

Anyone that does buy Glass from Google Play can also want to install the latest version of Android for the device. Google on Monday released XE21.0, which fixes up sluggish Google Now card updates — cards being a critical way to relay snippets of information to Glass's small display. According to Google's support notes, it will only take "a few seconds to see updates to flight information and sports scores."

The other main update in XE21.0 includes new accident indicators to help users avoid potential traffic. As Google notes, the new feature comes from its Waze app and appears when looking up routes to a destination.