Dead. As in, not pining for the fjords, passed on, shuffled off its mortal coil, dead parrot dead.

Now, I'm not really the right person to step out and defend Google Glass. I've written enough materials in the past year condemning the thing so much that you'd think Google had run over my dog with one of its robot cars.

Just read some of the material to the right of this paragraph. You can almost taste the bile dripping off the pages.

That being said, I think the project (notice I did not say product, because it isn't one yet) has potential but it has some extremely serious flaws that need to be corrected.

[Edit: I spoke too soon. Glass Explorer Edition is now available for anyone to purchase . God help us all.]

Some of these Adrian already pointed out, such as the exorbitant price of the Explorer Edition hardware, the limited availability of the device, the sheer nerdiness of the product aesthetics, awful marketing, and lack of decent applications.

Oh, did I mention the horrible battery life, the lousy audio, the terrible low-res display, and the fact that when you use it for any length of time, it gives you a splitting headache.

Some of these things can be corrected with further iterations. The price of the device will resolve itself, the aesthetics will improve, as will the marketing. The apps will come.

I also believe that Google is not a stupid company and views Glass like many of its other initiatives, as a research project foisted upon the masses, as a way of crowdsourcing product development, just like it has done with everything else it has released to date.

Adrian fears that because Glass has fallen on its posterior, it will potentially take the rest of the wearables industry down. I think we are being a bit too hasty here.

First, I think we can agree that wearable computing covers a number of form factors, not just augmented reality monocles like Glass.

In short, in a purely vertical scenario, nobody is being a Glasshole. The wearer is simply doing their job.

Wearable computing includes simple sensors like the Fitbit, smartwatches like the Pebble as well as more vertical-purposed and much more higher-end devices than even Glass.

These include those systems being tested by the military and police forces for anti-terrorism operations (such as for remote control of drones and robots) and those being used to assist in complex aircraft maintenance tasks or in other engineering scenarios, or even for medical/hospital use.

Vertical has always been the killer app for wearables. And in vertical scenarios nobody cares if you look bizarre wearing one or if the user is pointing a camera at you.

In combat soldiers are going to depend on such a device to give them situational awareness on the battlefield, and in a hospital a patient has more pressing concerns than some weird-looking medical equipment the doctor is using at bedside or at the operating table.

It's certainly no weirder and far less intimidating than being shoved into an MRI scanner.

In short, in a purely vertical scenario, nobody is being a Glasshole. The wearer is simply doing their job.

All the things wrong with Glass that Adrian mentioned can be improved with further development. But product development cannot improve the human beings wearing them.

Honestly, did we really expect Scoble, the very Glasshole template himself, to stay the course with yet another one of his fleeting tech infatuations? I'm surprised he stuck with it as long as he did. 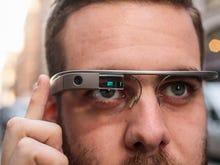 OK, Glass: How do I stop people calling me a 'Glasshole'?

Google Glass holds a fair few surprises — even if they are from the general public. How does a Glass wearer get around the social barriers of wearable tech?

Human behavior as well as our understanding of when to use these devices in non-vertical scenarios is what has to change. It's not acceptable to point a camera right in somebody's face either in any kind of interpersonal setting without consent, regardless of whether the thing is recording or not.

I'm aware of course that miniature cameras have been the stuff of "Spy Stores" and Hammacher-Schlemmer and SkyMall for ages. However just because you can buy a product and record someone without their consent doesn't necessarily mean that it is legal for you to do this under any number of state laws.

Yes, we know you're under public surveillance all the time. But let's not mix law enforcement as well as private security with intrusion of personal privacy and simply not being assholes to each other.

We know we can improve the way Glass and other consumer wearables appear so as to look less intimidating to people around them. Google has done so as much by recently partnering with Luxottica, the world's biggest producer of prescription eyeglass frames, to make housings for Glass.

But even so, the camera sensor is large, and it is stuck in a fixed position. One way the problem could be dealt with if is if the sensor/display module could be removed, like a hot-pluggable component, and stowed in a pocket along with your phone.

Or simply swiveled out of view when entering an environment where the use of wearables is considered undesirable.

I have no doubt whatsoever that technology will progress in such a way that it will eventually be possible to completely conceal a camera sensor, such as through the use of fiber optics. And it may be possible to conceal the entire display unit behind the eyeglass lenses or in the lenses themselves.

It may also be that at some point, such discreet wearables become so inexpensive that virtually everyone who wants access to them will be able to wear them.

In which case, we need to re-examine as a society how we interact with such things. And we should start thinking about it now.

In that future time, we will have to assume that we are always performing for a camera, and that the person on the other side of "Future Glass" can not only record you, but has access to a powerful sensor and software that can for example, detect changes in your body temperature or even read your heartbeat.

Perhaps the camera and accompanying software can even read and understand your facial expressions, even in a low-light scenario. Or has a sensitive microphone that can detect fluctuations in the tone of your voice, so that real-time analysis by the wearable or a more powerful wireless-tethered device can determine if you are under stress or are uncomfortable with the situation.

Now we're talking about apps that can actually do some interesting things.

This all sounds like science fiction, but the fundamental technology exists today in the Kinect sensor that comes with every XBOX ONE.

The Kinect sensor is a very sophisticated and sizable piece of equipment. But if we've learned anything about the tech industry we know that everything eventually gets miniaturized.

Whether it takes five or even ten years is of no importance, we have to start thinking about these social issues today.

We have a right as human beings to know if someone is using this technology in our proximity, and we should have a way to "opt-out" of situations where it is being used, either by the use of enabling technology that restricts their use or through good ol' fashioned, low-tech social reinforcement.

Society just simply needs to learn that there are times when whipping these out in groups of people that do not want them around is not okay. And until that lesson is learned, we will not hear the last story of "I was a Glasshole in public and I was assaulted."