After a four-month pause, Glass updates "are back", according to Google, which is promising the networked eyewear will be updated to KitKat within the week.

Ahead of Google's one-day sale of Glass to the public — open to anyone in the US today — the company has announced a major but "subtle" update that will bring Android 4.4 KitKat to the hardware. 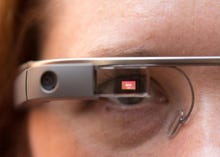 The one big factor Google Glass is missing

Before we call Google Glass the next big thing in tech, remember that it’s still missing one critical element that all revolutionary products must have.

The last update Glass Explorers got was back in December, which added a lock screen, Hangouts messages, YouTube uploads, an iOS app, weather alerts, and a Wall Street Journal reader.

The next update, available later this week, will bring "photo bundles", which group timeline, photos, videos, and vignettes into bundles to cut down on swiping. Also coming are photo replies in Hangouts, easier ways to send feedback to Google, and the ability to sort previously-created custom voice commands.

The update however also temporarily removes Glass' video calling functionality, which apparently didn't live up to the Glass team's standards.

"Explorers have told us so directly, and fewer than 10% of them use video calls. For this reason, we've made the hard decision to remove video calls from Glass until the experience is better," the Glass team said.

"We don't know when that will be, but in the meantime, keep an eye on MyGlass as more Glassware is built and released – we're already seeing the developer community work on other video streaming services."

Google advised owners to keep an eye out on the Glass Journal for Explorers for more updates.

Despite the changes, Google described the KitKat update as"subtle", and the most part, users won't see any difference in using Glass once it's installed, according to the Google Glass team.

Anyone inside the US that is interested in becoming a Glass owner and breaking into the Explorer program can do so from 9am PDT on Tuesday. As with previous campaigns, the prototype device will set punters back $1500 plus tax.

While Google has been working out processes to deliver and fit Glass devices to consumers, the device has found support from enterprise application developers that believe it has a solid role in business, from supporting surgeons during training to construction and the warehouse .