Full Bio
Posted in Between the Lines on September 8, 2021 | Topic: Cloud

Google Cloud is staking its claim in the fast-growing gaming industry, creating a new executive role focused on Gaming Solutions. Google Cloud is tapping Jack Buser, who currently serves as Director for Games for Stadia, Google's cloud gaming platform, to spearhead the effort.

As Google Cloud's Director of Global Gaming Solutions, Buser will report to VP of Industry Solutions Lori Mitchell-Keller. His first day in the new role will be September. 13.

Buser's new role sheds light on the evolution of Google's gaming strategy, as it puts more focus on serving as a platform for third-party game publishers and developers. It also cements gaming as a crucial category for Google Cloud, putting it on par with a handful of other key verticals like healthcare, retail and manufacturing.

"Google Cloud sees incredible momentum across all industries, and gaming is one of the key verticals we are investing in," a Google Cloud spokesperson told ZDNet.

One of Google's splashiest investments in gaming was the 2019 launch of the gaming streaming platform Stadia. Despite a rocky start and its shift away from in-house game development, Stadia recently added its 200th unique game; Google told ZDNet. Google Cloud, meanwhile, runs services such as Game Servers for managing multi-cluster game server fleets. This year, Google Cloud invested in esports-facing solutions like ActivStat for Call of Duty League.

Google's interest in gaming should come as no surprise. The industry is sizable and growing -- generating around $175.8 billion via consumer spending in 2021, according to research firm Newzoo. Due to the pandemic, the gaming industry actually generated slightly more in 2020, growing more than 23% year-over-year to hit $177.8 billion.

While there was a slight dip this year, the global gaming market is expected to exceed $200 billion by 2023.  Meanwhile, players in the past year have moved more to mobile and cross-platform games.

Amid this backdrop, Buser will help Google Cloud develop broader relationships with game publishers and developers. The idea, Google said, is to connect with players through a holistic suite of products and services. The tech giant could offer, for instance, end-to-end collaboration solutions that include YouTube as a streaming partner for live broadcasts or e-sporting events.

The move should also help Stadia, Google Cloud says, arguing it should bring new partnership and product opportunities across Stadia and Google Cloud.

Buser spent more than five years helping to create Stadia from the ground up, securing partnerships with leading game publishers and developers. Before joining Google, Buser spent nearly a decade in general management roles at PlayStation, building platforms like PlayStation Now, PlayStation Plus and PlayStation Home.

"Jack's hire illustrates Google Cloud's continued investment into our global, customer-first gaming strategy, and his five years at Google will help open doors for broader strategic partnerships with customers across YouTube, Stadia, and more," Mitchell-Keller said in a statement. "Jack brings 20 years of experience within the industry as well as a unique blend of business and technical knowledge to further expand our ability to serve gaming customers."

Prior and related news: 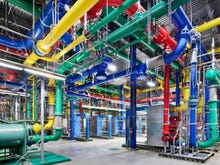 What is Google Cloud and why would you choose it? For Google to stay relevant and remain in contention, it has to keep innovating and changing the rules.
Show Comments
LOG IN TO COMMENT
| Community Guidelines