Google announced on Thursday that Android Wear 2.0 has been delayed to early 2017, and in the mean time, it will push a new developer preview that adds Google Play to the platform. 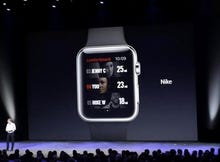 In a blog post, Google said it has gotten "great" feedback from the developer community on Android Wear 2.0, and that it "decided to continue the preview program into early 2017, at which point the first watches will receive Android Wear 2.0".

Google said developers can now build and publish watch-only apps for users to discover on Google Play. Users can update or uninstall apps in the "My apps" view on their watch.

Android Wear 2.0, announced at Google I/O 2016 in May, is a significant update for the wearable software. It introduces a new user interface, widgets called "complications" for watch faces, a new keyboard for messaging, and enhancements to Google Fit.

The addition of apps on Android Wear will make Android smartwatches more independent of smartphones. In the past, Android Wear apps were bundled with smartphone apps.