Google has announced Android Wear 2.0, which promises to be the biggest update yet to Android Wear and introduces several new features to improve watch faces, messaging, and fitness.

The update, unveiled at Google's I/O conference, introduces a new user interface, standalone apps, 'complications' or widgets for watch faces, a new keyboard for messaging, and enhancements to Google Fit. 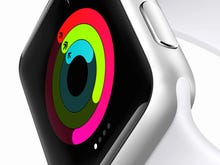 Android and iPhone: What are the latest must-have apps?

Health and fitness apps are rising to prominence in a crowded market, probably helped by the arrival of the Apple Watch.

Standalone apps help unshackle Android Wear devices from smartphones. Android Wear 2.0 apps directly access the internet via Bluetooth, Wi-Fi, or a mobile network, allowing them to function fully without a Wear device being paired to an Android phone or iPhone.

Google has released the developer preview but the final public release won't be available until the fourth quarter.

Some aspects of the new user interface rely on a device having a hardware button, which in Google's demo, is required to open the app launcher.

In Android Wear 2.0, the app launcher is designed for round watch faces, and offers a carousel-style app menu that can be scrolled through by sliding the finger around the edge of the display.

Other UI improvements include a Complications API. A complication, which is any feature in a conventional watch that goes beyond hours and minutes, allows widgets to be featured on a watch face.

The update provides an interface for users to choose which data source they want for a complication, allowing them to swap out, say, a calorie-tracker for a water-tracker or step-counter.

The new keyboard and handwriting input options join voice, which was the only input available for Android Wear.

Finally, an updated Google Fit platform will count users fitness data and share other fitness apps on the device, helping them stay in sync with Google Fit data.