Google risks a partial ban on its search engine business in the 27 member state bloc of the European Union, should it fail to negotiate a settlement with authorities on continuing antitrust matters.

EU Competition Commissioner Joaquin Almunia said, according to Bloomberg, that EU authorities "can prohibit some of the choices made by the search engine," should ongoing discussions fail.

"Google has to decide whether it improves the planned solutions it presented," he added.

It comes just days after Google said it did a "pretty good job" in addressing concerns by the European Commission over its alleged abuse of its dominant position in the search and advertising market. 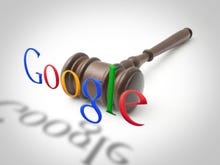 Google: We did a 'pretty good job' on EU antitrust concessions

The search giant believes it has addressed the EU's concerns over its ongoing antitrust case, despite facing the possibility of adjusting its concessions further to appease the executive body.

Comments reportedly did not go down well in Brussels, based on Almunia's comments today. The commissioner said months ago that the search giant "should improve [its] proposals," without leaving room for Google to manoeuver.

Almunia hinted that should a deal go ahead, it will "probably" be reached by the end of this year.

Failing that, a "prohibition decision" could be thrown Google's way by the Commission. Essentially, should Google successfully settle and make commitments that would see it change its business practices, the company has done no wrong and an infringement has not been formally found.

Failing that, and in worst-case scenario for Google, a prohibition decision finds that there has been an infringement and the Commission can step in to impose its own sanctions against Google.

At least when Google is floating its own proposals, it can gamble and bargain away from its core revenue-generating businesses. If the Commission rolls its sleeves up and gets stuck in, there's no telling how much damage it could cause for Google's bottom line — which, frankly, isn't the Commission's problem.

Currently, the proposals tabled by Google are in the hands of rivals and competitors in the region, in order for the Commission to determine whether or not they satisfy concerns originally made by the complainants. Indications suggest that they're not.

"The current package is clearly insufficient," said ICOMP's lawyer David Wood speaking to Reuters last month. "It is really unlikely if the current proposal can be improved to such a point where it can be effective."

Should settlement negotiations fail, Google could face a fine of up to 10 percent of its global annual turnover for infringing years — an amount that could be as high as €2.9 billion ($3.8bn) based on the company's 2011 global revenue.