Google Glass now comes with new Apple iPhone functionality in an effort to make the wearable more open outside the Android ecosystem. 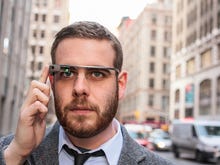 Google Glass: The most personal piece of tech you may never own

Some gadgets you can use as though they were your own, like tablets and televisions. But Google Glass, the new kid on the wearable technology block, extends the nature of "personal tech" to a whole new level — even more so than your trusty smartphone sidekick.

Later this week, just days after the eye-glass device landed with the latest version of Android KitKat , new features will allow iPhone users to display calendar events and text messages in their eye-level display.

A new update to XE16 (Explorer Edition, version 16), due to land by Friday, won't allow iPhone users to respond to text messages due to "some limitations with iOS," according to Google. But Android users don't have to worry about that: Glass and Android are like two perfectly functional peas in a pod. The calendar app will also display your agenda, and send responses or dismissals on the move.

Glass continues to be a prototype work in progress for the search and mobile giant, and its ecosystem seems to promise to be as open as its own mobile platform — at least the way things are going.

The decision to open up Glass to non-Android users, notably iPhone and iPad owners, was a little surprising. Glass remains in its infancy and purely as a device to test what works with its owners and what doesn't. Making Glass an Android lock-in product was not going to help anyone. Glass owners can still perform the vast majority of functions through iOS-powered devices, albeit with very few limitations.

Over time, it made sense. Glass remains in its infancy and purely as a device to test what works with its owners and what doesn't. Making Glass an Android lock-in product was not going to help anyone. Glass owners can still perform the vast majority of functions through iOS-powered devices, with very few limitations.

Does Glass have any appeal or potential for the average consumer? Possibly...but it won't be easy for Google to get there.

It shows more than anything Google's willingness to help garner as much feedback from its user base as possible. Because right now, for Google, it's all about the data: what works, what doesn't, and what might sell.

The question remains, will Google's openness to Apple's platform help the wearable device sell? And will Apple fans dig Google Glass at all? Until the iPhone and iPad maker comes out with its own eye-glass wearable, it's Glass or nothing.

Glass will, at least for now, remain a niche product for a small market of people. It's going to be at least two or three years before it becomes mainstream — if it ever does. Restricting the device to Android would significantly hamper its effort to get out there to the wider populous.

But that closed wall garden can have both plus and minus sides. The closed wall will give Google complete control over its wearable ecosystem. The downside is that it could hold back the device from getting to the mainstream.