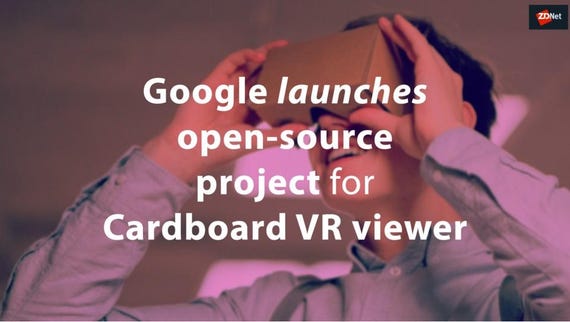 Google has released an open source project for its Google Cardboard to allow developers to build additional experiences and add support to their apps for various smartphone screen solutions and configurations.

As part of the project, Google has released libraries for developers to build their Cardboard apps for Apple iOS and Android. The libraries support virtual reality (VR) features such as motion tracking, lens distortion rendering, and user interaction via the viewer button.

An Android QR code library has also been included, Google said, pointing out that it will mean apps can be paired with any Cardboard viewer without the need for the Cardboard app.

"An open source model will enable the community to continue to improve Cardboard support and expand its capabilities, for example adding support for new smartphone display configurations and Cardboard viewers as they become available," Google AR and VR product manager Jeffrey Chen wrote in the blog.

"We'll continue to contribute to the Cardboard open source project by releasing new features, including an SDK package for Unity."

The launch of the project comes five years after Google first introduced Cardboard, and follows on from Google's Cardboard Manufacture Kit, a separate open source project that enabled third-party manufacturers to design and build their own compatible virtual reality viewers (VR).

Chen noted however, that while the overall usage of Cardboard has declined and Google is no longer actively developing the Google VR software development kit, he said making Cardboard open-source will cater for the consistent usage of Cardboard for entertainment and education experiences, such as YouTube and Expeditions.

Back in 2017, Google also opened up its Daydream VR headset up to developers. Although, it was not enough to keep people interested in the VR device, which resulted in the company waving goodbye to Daydream last month. Google admitted its Daydream VR program didn't catch on and therefore decided to end it altogether.

A look at Google's first Daydream VR headset and phone, which combine to create an immersive, intuitive experience.