The Google Photos app for Android has been updated with a new bottom navigation bar for easier and faster use.

Google rolled out the revised Photos for Android in Google Play on Wednesday, which the company says offers an improved design and better performance. 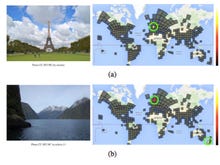 Google AI can pinpoint where any snap was taken, just by looking at pixels

The new bottom navigation bar is the major design change, enabling switching between views while looking at photos rather than having to tap the menu icon and select Photos or Assistant from the slide-out panel.

The other main view, Collections, has now also been renamed to a less confusing Albums. Again, for easier navigation, Google has added a carousel at the top of the Album view for users to scroll through shared albums, people, places, things, animations, collages, movies, and device folders.

For now the update is exclusive to Android but Google says the same changes will be available for iOS soon.

Google last month decided to retire its old photo-management tool, Picasa, to focus solely on Google Photos and aim for a better experience across mobile and desktop.

One of the first updates to Google Photos for the desktop since then came this week with the introduction of a new feature that allows users to enter and stay in editing mode while switching between images.

The edits are saved on the go and unwanted changes can be reverted. A new aspect ratio selector feature also offers a choice between original, square, 16:9, and 4:3.

Presumably, Google will soon also rename Collections as Albums on the web version of Google Photos but that has yet to occur.