Google may be on the cusp of launching its own line of mobile phone and data plans for consumers in the US, in a bid to shake up the cellular industry there.

To support the new mobile plans, Google is looking to launch a wireless service that runs on infrastructure owned by T-Mobile and Sprint, making the search giant a mobile virtual network operator (MVNO), The Information reported on Wednesday.

Not a huge amount is known about how Google intends to package its product, other than the fact the project is codenamed 'Nova' and will likely launch this year under the leadership of Google exec Nick Fox as part of an effort to transform the US wireless market.

MVNOs in the US and Europe have a mixed record in terms of their own success, however they have helped usher in price wars in some markets and often concentrate on monthly pay-as-you-go deals rather than the traditional two-year locked-in contract model. 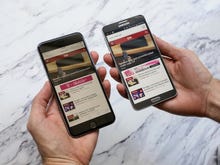 iPhone die-hards may find flipping to Android a ghastly proposition, but for the less committed — likely with older iPhones — cheaper and larger Android phones with 4G are a tempting option. Here are 13 tips to help make the move.

Google would be entering a competitive market. There are already dozens of other MVNOs in the US that resell wireless services from all the major operators: AT&T, Sprint, Verizon, and T-Mobile.

Should the plan proceed, the big difference between other MVNOs and Google is likely to be that the search company, just as with Android, may not put direct profit first and foremost for the endeavour. As long as it provides more consumers with wireless access, Google will support its main business of selling ads.

Google is juggling a number of broadband and wireless projects in the US and around the world to improve internet access, including Google Fiber and Project Loon. It's also pushing for access to unused 3.5GHz spectrum that could be used for a small cell network in large cities and operates outside the more expensive bands licensed to major cellular networks.

Google declined to comment on the latest wireless project when asked by ZDNet.

While mobile LTE coverage in the US is far from a problem, consumers are faced with pricey mobile subscriptions by international standards, while the uptake of fixed-line broadband is expected to remain low in the country. According to analyst firm Ovum, US high-speed broadband usage relative to other nations is set to decline over the coming two years due to these two factors.

"It is in Google's interest to get as many [people] as possible connected to the internet and, where they see that access is a barrier, they might intervene and ease the access costs, if that is the barrier," Ovum principal analyst Dario Talmesio told ZDNet.

"Clearly, their move could potentially be a hugely disruptive one. Sprint and T-mobile have no interest in seeing their own market being severely discounted by Google.

"Does Google have enough revenues and margins to pass on to customers in the form of subsidised access to the internet? Probably not, but if they see the access market becoming a barrier to their core business, they have to do something about it," he said.

According to the Wall Street Journal, Google has two separate contracts with T-Mobile and Sprint. The deal with sprint has a "volume trigger" that would force the companies to renegotiate if Google's customer base breaches a certain level.

Join Discussion for: ​Google planning to get into the mobile data...