Google's new wind-predicting algorithms have kept one of its internet-beaming air balloons aloft in Peru's airspace for a total of 98 days. 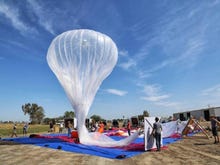 With the aim of boosting internet coverage on the Indian Ocean island, Google is set to begin testing Project Loon technologies and spectrum in Sri Lanka this week.

Google's measure for success when it comes to Project Loon isn't just keeping balloons flying for 100 days, but ensuring they're not carried out to sea by air currents where they can't deliver wireless internet to the public.

Project Loon, which is part of the X unit of Google's parent company Alphabet, has used human-coded algorithms to determine how high or low in the stratosphere the air balloons need to be to catch a current that will take them in the desired direction.

However, according to Wired, updates to Loon's navigational system apply machine-learning techniques to the roughly 17 million kilometers of flight data it's collected to predict wind directions at different altitudes.

Its new algorithms, for example, allow a balloon's immediate heading to be sacrificed if a course ultimately leads to a better outcome, such as traveling towards the ocean to catch a current that then takes it back to an area over land.

"When a wind pattern couldn't be found to keep the balloon over land, our algorithms picked the next best option, sending the balloon drifting out over the Pacific Ocean to pick up easterly winds that could help it sail back into position," the Loon team said.

To achieve 98 days total above Peru, the balloon made nearly 20,000 adjustments. Google says after a 12-day trip from a launch site in Puerto Rico, the balloon spent most of the time at 20km latitude above Chimbote, which is located on the South Pacific coast about 400km north of Peru's capital, Lima.

Sal Candido, a former Google search engineer who worked on this Loon test, told Wired the navigation system uses reinforcement learning to improve the algorithm's behavior on the go with newly-collected data.

"We have more machine learning in more of the right places. These algorithms are handling things more efficiently than any person could," Candido said.

Although it's wind-prediction system is not perfect, greater control over a balloon's direction will allow Project Loon to provide internet coverage with fewer balloons instead of attempting to blanket an area with them.