The mosquitos have been engineered to try and bring down disease transmission.
Written by Charlie Osborne, Contributor on July 17, 2017 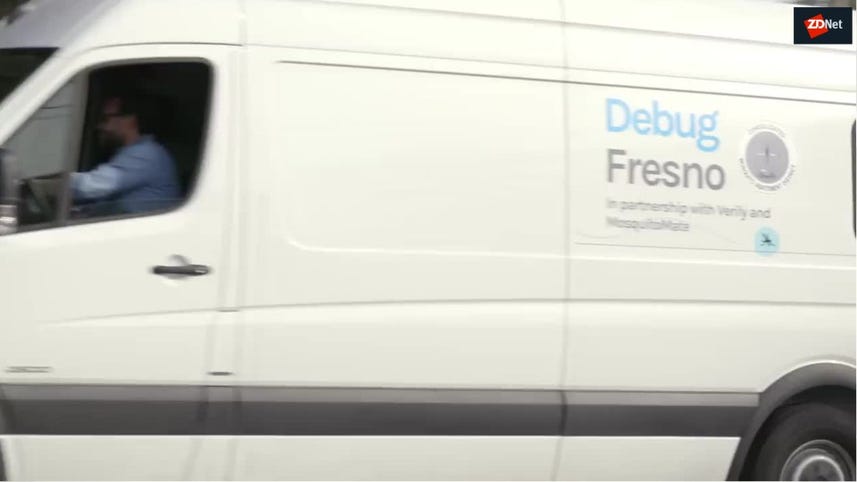 Verily has begun releasing sterile mosquitos into the wild as a way of reducing population numbers and the spread of disease.

Verily, Alphabet's life biotech division formerly known as Google Life Sciences, said last week that the Debug Project, an initiative to reduce the volume of disease-carrying mosquitos worldwide, is now ready for a test in the field.

The field trial, Debug Fresno, is taking place in the Californian county. In collaboration with MosquitoMate and Fresno County's Consolidated Mosquito Abatement District (CMAD), the trial, starting now, aims to test methods to reduce the population of the Aedes aegypti mosquito, which carries diseases including Zika, dengue, and chikungunya.

The invasive mosquito species first surfaced in Fresno in 2013, but no cases of the diseases mentioned have yet been reported.

To tackle the issue, Verily will release at least one million sterile male mosquitos each week in Fresno. The insects will be treated with Wolbachia, a naturally-occurring bacteria which prevents the eggs produced by the males and wild females from developing and hatching.

Male Aedes aegypti mosquitoes infected with Wolbachia were first released into the country in 2016 due to the efforts of CMAD and MosquitoMate, but Verily says with the addition of new robots, automaton, and software algorithms, the breeding of male mosquitos has been increased in volume by 25 times, more than the company was able to produce before.

Verily says the "automated mass rearing and sex-sorting processes" developed at the company now make the release of one million insects a week possible.

In addition, on-the-ground release devices also allow the mosquitos to be released in an "even and targeted way" during the breeding season.

Once the release has been accomplished, the Verily team will compare the adult population and egg hatching rates in the trial areas to two control neighborhoods.

For any residents worried about a sudden increase in mosquitos during the trial, it is worth noting that males do not bite or transmit disease to humans.

Debug Fresno will take place over a 20-week period in two neighborhoods each approximately 300 acres in size. The mosquitos will be released from Debug Fresno's "Mobile Mosquito Unit" vans.

Over time, the team hopes to see a dramatic reduction in Aedes aegypti.

"Field studies allow us to test our discoveries and technologies in challenging, real-world conditions and collect the necessary evidence to bring them to a broader scale," Verily says. "We hope to demonstrate success with Debug Fresno that will benefit the local communities working with us in this study and later other communities globally where Zika, dengue, and chikungunya are endemic."

In April, Verily kicked off a 10,000 person study called Project Baseline which explores why people who are generally healthy become sick.

The study is likely to be at least a decade-long effort and will use data sources including wearable devices, physical exams, electronic health records, and surveys and diaries to ascertain the biological reasons behind becoming ill.