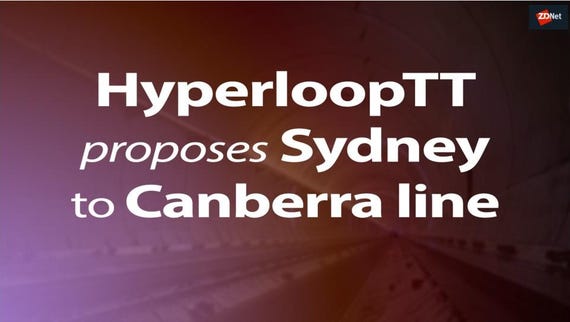 The Australian House Infrastructure, Transport and Cities Committee has recommended the federal government maintain a "close watch" on the development of Hyperloop technology, specifically with a view to its development as a transport solution in Australia.

It followed claims made by Hyperloop Transportation Technologies (HyperloopTT) co-founder Bibop G. Gresta during the committee's hearings in February that his company's solution "promises to change our life".

The company pitched its idea to move people from Sydney to Canberra in 22 minutes, with passengers travelling at up to 700 miles -- around 1,100 kms -- an hour in floating pods within low-pressure tubes.

"The Hyperloop has significant advantages over competing transport modes," the committee wrote in its report [PDF] into Innovating Transport across Australia: Inquiry into automated mass transit.

"The Hyperloop would have lower capital and operating costs, smaller land requirements, and less environmental impacts than other transport modes. It also offered a more positive passenger experience."

Hyperloop is a new form of ground transport currently in development by a number of companies. As explained in the company's submission [PDF], the HyperloopTT system is powered by a "combination of alternative energy sources to ensure sustainability and low cost", bringing "airplane speeds to ground level, safely".

Read more here: What is Hyperloop? Everything you need to know about the race for super-fast travel

The committee made a total of 17 recommendations in its report, with many calling for plans, strategies, and the articulation of a clear vision from the government, highlighting a need for Australia to properly plan for a future where transport is driverless and citizens have to travel long distances quickly.

Specifically, with a view to "ensuring that transport automation takes place within a wider planning framework which integrates automated transport with the planning of the urban and regional environment to maximise liveability, sustainability, and productivity, while acknowledging the different needs of greenfield and brownfield sites".

One recommendation in particular asks for the government to establish a new automated transport "ecosystem", which includes rail, light rail, and buses, connected to smaller vehicles providing connectivity within cities and suburbs, including private automated transport and ridesharing -- something pitched by Uber during its time facing the committee in February.

The report called on the federal government to work with state and territory governments to develop a strategy for managing the transition to full automation on roads, including mapping regulatory responses, vehicle specifications, and driver training requirements.

Meanwhile, another recommendation asked government to articulate a clear vision for cities and regions, and the connectivity within and between them.

With concerns over government access to the data produced from connected cars, the committee asked the strategy to cover IT infrastructure requirements, data management and sharing, privacy, and cybersecurity.

Another recommendation made was that the Australian government establish the statutory Office of a National Chief Engineer, which it said would provide independent expert advice on the planning and development of Australia's infrastructure.

The committee also recommended the government facilitate the introduction and uptake of electric vehicles.