Company considers itself a ‘game-changer’ for Australian transport, and wants a government handout to create an innovation hub, for good measure.
Written by Asha Barbaschow, Journalist on Feb. 27, 2019 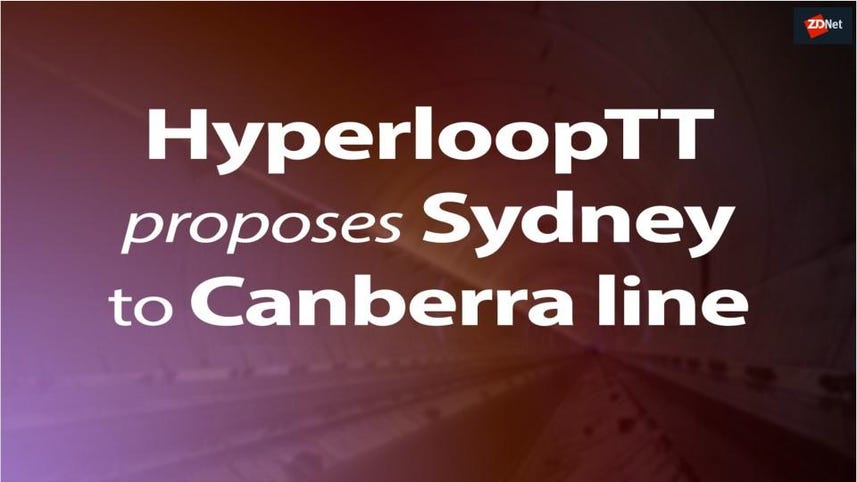 Hyperloop Transportation Technologies (HyperloopTT) has said it is confident its solution is a game-changer for the future of Australian transport, promising, for example, to send people from Sydney to Canberra in 22 minutes.

"Hyperloop presents an opportunity for Australia to invest in the future, to write a new chapter in its transportation history," Gresta said.

Appearing before the committee alongside Gresta was Wesley Heron, who leads the company's efforts in Australia. According to Heron, HyperloopTT can make it easier for people to live outside metropolitan areas and still commute to cities for work.

​What is Hyperloop? Everything you need to know about the future of transport

Hyperloop technologies could revolutionise travel: here's everything you need to know about the technology and the companies involved.

"We've been speaking to state governments around the country and also federal government, and apart from the obvious Sydney to Melbourne, Sydney to Brisbane, Sydney to Canberra corridors, the regional corridors are important," Heron explained.

"It's an important development -- high-speed rail doesn't promise this."

Hyperloop is a new form of ground transport currently in development by a number of companies, which could see passengers travelling at 700 miles an hour in floating pods within low-pressure tubes.

Read more here: What is Hyperloop? Everything you need to know about the race for super-fast travel

As explained in the company's submission [PDF], the HyperloopTT system is powered by a "combination of alternative energy sources to ensure sustainability and low cost", bringing "airplane speeds to ground level, safely".

"The advantages of Hyperloop travel are transformative, changing travel time from hours to minutes across Australia and into regional centres thereby creating decentralisation and game-changing economic opportunities across a properly connected Australian continent," the company wrote.

According to Heron, continuing to invest in rail technology is a waste.

"The HyperloopTT technology is in testing and commissioning phase, it is here and now, it is not a pipedream, somewhere over the rainbow, it is being designed and built in a project in Abu Dhabi this year."

HyperloopTT also wants to bring research and development (R&D) down under, with Gresta asking the committee to strongly consider helping his company's campaign to stand up an innovation hub on Australian soil.

"We would also like to bring our R&D to Australia, fostering local talent, companies, universities through an innovation hub that allows them to engage with our international partners," he said.

In discussing how the manufacturing work currently underway in Abu Dhabi is converting the area to almost Silicon Valley status, Heron said there is a similar opportunity in Australia, specifically in rural areas.

"There are opportunities and spin-offs from the Hyperloop technology," he explained.

"By going to the moon we innovated six industries; in Hyperloop we already touch 17 industries," Gresta added.

"We aren't going to sit in front of you and say we want to build you the Hyperloop and provide all the construction materials to Australia, we say to you, here's our technology, Australia come and build it with us and give Australia the opportunity, and those small towns the opportunities to set up the business, the technology, and provide the materials to actually build our Hyperloop," Heron said.

Heron has asked for a mandate from government to get work started on introducing Hyperloop into Australia, saying he's concerned it might be too late.

"We'd require a mandate from government that says: Government is happy to invest in Hyperloop feasibility studies and Hyperloop innovation hubs and give us the opportunity, for let's say two-hundredths of the cost that is being allocated to things like high speed rail, to quote to you what a feasibility study would cost on the corridor of choice ... my concern is we've missed the boat," he said.

"This technology is here, it's not something that is out there on the horizon, it is here and now and being built, and it's time that Australia takes that leap."

Gresta believes it will take four years from a feasibility study to having a working solution in place.

One track will be ready this year, followed by another in 2019 aimed at developing superfast rail technology.

The man of many projects wants to speed his transport concept up to half-Mach then hit the brakes. The result should be one heck of a high-speed stress test.

Mobility
Air purifier deal: Save up to $105 on Winix air purifiers