Tax avoidance schemes allegedly used by Apple, Amazon, Google, and others, could soon be stopped firmly in their tracks, if a coalition of Western governments gets its way.

According to the Reuters news agency, which has seen a draft report written by the economic and tax policy advisory group for G20 countries, the Organisation for Economic Cooperation and Development (OECD). According to the draft report, tax loopholes that allow these companies to pay zero tax in many European nations could soon be closed. 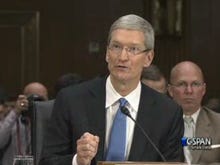 Apple says it has a "what you see is what you get" approach to its taxes, but Congress disagrees, believing it sought the "holy grail of tax avoidance." Apple's Tim Cook testified.

The OECD is charged with ensuring that loopholes that allow major technology companies can no longer siphon off their revenues and profits to countries with lower tax rates and avoid paying the full amount of tax in the jurisdictions they are located.

For months, corporate tax avoidance has become a key political debate in numerous states around the European Union, notably in the U.K. and Ireland , where many of these companies have a physical presence.

The OECD's "action plan," dated May 27, has already noted a number of schemes that allow companies to shift their profits elsewhere in the world. "Domestic and international tax rules should be modified in order to more closely align the allocation of income with the economic activity that generates that income," the document said.

In spite of teetering on the edge of further economic downturn and recessions, many EU countries are now stamping their feet with "enough is enough" rhetoric.

In the U.S., where the issue had previously been used as partisan political weaponry, politicians from both sides of the political spectrum have rallied together to investigate claims that U.S. companies may not be abiding by U.S. tax rules.

One such company was Apple, whose executives said in prepared remarks ahead of a Congressional testimony, that it had "created or supported" 600,000 jobs in the U.S. and had helped create an entire employment ecosystem around its application store offering.

But lawmakers disagreed in part with Apple's "what you see is what you get" tax approach, with claims by Sen. Carl Levin (D-MI), the chair of the U.S. Senate Permanent Subcommittee on Investigations, that while Apple does not evade paying its taxes, it  sought out nefarious ways to avoiding paying the full amount of tax  where it is located.

Apple chief executive Tim Cook said Apple would support a "reasonable tax rate" that would allow the multi-billion dollar technology giant to repatriate its cash from foreign banks back into the United States.

The OECD will table the plans for discussion at a G20 meeting later in July.