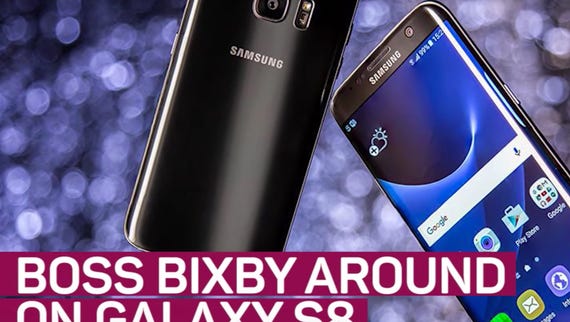 While I have been using the Samsung Galaxy S8 Plus (see my full review) for the past couple of months, I never press the Bixby button on purpose. As of today, that is changing.

Last week, Samsung announced a Bixby sneak peek for those willing to sign up and take Bixby Voice for a spin before the full release that is planned to launch in the near future. Today, Bixby Voice appeared on my Galaxy S8 Plus, and I've spent a few minutes trying it out with many more hours of use planned in the coming weeks.

If you signed up for the advanced look of Bixby Voice, make sure to launch the Galaxy Apps utility on your Galaxy S8 or S8 Plus and make sure every Bixby related app is updated. It's been a few weeks since I opened Galaxy Apps, and I had almost 20 apps and utilities to update on my phone. After you get those apps updated, launch Bixby.

For those who have been selected for the advanced preview of Bixby Voice, when you then launch Bixby by pressing on the lower-left button, you will be prompted via voice to walk through a setup wizard. Check out my screenshot gallery for what you can expect as you train the phone to listen to your voice and select apps for Bixby Voice control.

Once the setup is complete, you will see there are about 3,000 actions that are supported in this current beta release. There are core Samsung apps that support Bixby Voice, along with many more that are currently in Bixby Labs.

You can launch Bixby by saying "Hey Bixby" or by pressing and holding down on the Bixby button. If you use the button, hold it down as long as you are commanding Bixby and then release it for the action to occur.

Your command should be in the form of "Open [app name] and [perform a task]" in order to be the most effective. So far, Bixby has performed as well as I could expect and I have a lot more to do in order to figure it all out. Hey Bixby, teach me more.