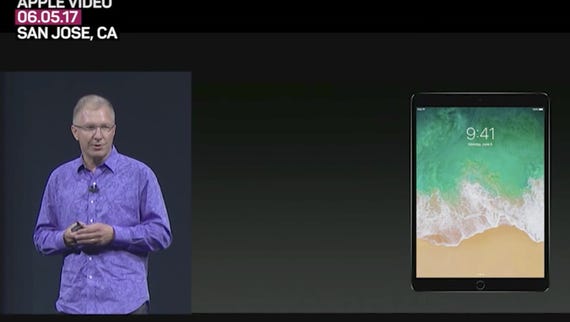 Apple's WWDC opening keynote may have been limited to 2.5 hours, but there was plenty of new products and services announced during that time.

There was, and still is, a lot to take in from today's event. Apple had a demonstration area open to press right after the event ended. Naturally, I ran as fast I could to it to get as much time with the devices as I could.

Although, I didn't take too much time to check out the new MacBooks or iMacs, as there's not much I can say about the new processors and internal upgrades in a matter of a few minutes.

However, I did take some time to check out the new iPad Pro, Apple's AR play, and I gawked from afar at the HomePod and iMac Pro.

The first thing that stands out about the new iPad Pro models is just how bright and clear the display is. The smaller iPad Pro has the same 264 ppi pixel density as the bigger version.

What's most interesting about the smaller iPad Pro is how thin the bezels are on either side of the screen. The slimming down of bezels allowed Apple to grow the size of the display from 9.7-inches to 10.5-inches, without significantly growing the overall size of the tablet itself. Hopefully this is a preview of what Apple is going to do with the next iPhone.

The 10.5-inch model still weighs right at a pound and feels comfortable to hold in one hand.

The real star of the iPad Pro story today, however, isn't the new form factor. Instead, it's the improvements to the overall iPad Pro experience in iOS 11.

A new Files app - finally - gives users access to a limited file system on the iPad. A new multitasking design makes switching between multiple apps easier, removing the headache and fuss of changing between apps on older versions of iOS.

Drag-and-drop is also another notable addition to the iPad Pro feature set. Now you can move photos or text between apps using the familiar drag-and-drop method we've grown accustomed to on a computer.

During my time with the new iPad Pro, I mainly tested the new features on an early version of iOS 11. They seemed to work as promised, but really, this is something we won't be able to truly report on until Apple has officially released iOS 11 this fall.

Apple used the same app that was used during the keynote to demonstrate its ARKit platform. The app is rather simple: You scan a flat surface and then place a digital cup of coffee, a lamp, or a vase on the surface. You can then interact with the item on the display of the iOS device; turning the lamp on and off with a tap, for example.

The AR demo was just as smooth as the keynote demo. Actually, it was more impressive due to the difficult lighting from TV camera lights and flashes constantly firing.

While my time with the AR demo was brief - there's only so much you can do with a fake cup of coffee and a lamp - it was the most impressive of the day.

Until Monday, Apple kept to itself about its intentions for augmented reality and virtual reality for that matter. Up until now, it was assumed Apple had fallen behind Google and Microsoft, both of which have long made it clear what they intend to do with AR.

We may not know just how Apple plans on using its AR tech in the future, but right now it's giving developers the tools to build with ahead of iOS 11's release this fall.

In other words, by releasing ARKit now Apple is able to boost the appeal of AR across its iOS devices, but when it's ready to unveil the full story, developers will also be ready.

Apple had a single iMac Pro and one each of a white and space gray HomePod in the demo area. We were not allowed to touch either product, which is unfortunate but understandable with both products still several months out.

The HomePod is roughly the height of a bottle of water. It looks like a Mac Pro, only shorter. The display on top of the speaker is bright and visible, to let you know Siri is listening to your commands.

If Apple is able to provide the sound quality it claims in a device as small as the HomePod, then I can see it being a legitimate Sonos replacement for those who are invested in the Apple ecosystem of apps, services, and hardware.