Full Bio
Posted in Technically Incorrect on April 5, 2020 | Topic: Working from home: The future of business is remote 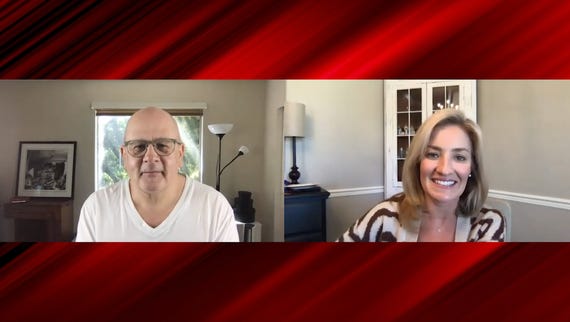 How Apple's AirPods Pro are saving a marriage
Watch Now

It was my first taste of a virtual dinner party.

Should you not have partaken of this coronaviral experience, it involves cooking and eating at home while your friends do the same. And while you stare at each other and act natural through the entirely unsafe prism of Zoom.

Last Saturday, my wife and I were invited to such a future-fun affair by two of our more trusted friends.

At first, it was a little stilted. You're forced to navigate the fact that the image on the screen is either static or moving in a herky-jerky manner. Which isn't exactly how it usually goes when the four of us get together. At least not in the first couple of hours.

At one point, though -- their second bottle, I believe -- Donal offered a revelation: "I've found a way to save our marriage."

I hadn't been aware their marriage was in trouble. Indeed, they're suave and garrulous men about town who actually seem to like each other a lot.

It seems, though, that the Bay Area's shelter-at-home order brought home disturbing truths.

As Donal explained: "Kevin works from home. I go to the office, so I've never really seen him at work for a whole day."

"Surely you had some idea," I suggested. Kevin works in the very stressful BS business -- I'm sorry, I meant PR -- where he spends all day prising money out of clients while promising them fame. Well, fame of sorts. Donal, on the other hand, is a designer.

"Well, yes. Haven't you ever been out to dinner with him?"

"But this is different. He's loud in the morning, loud in the afternoon and he sometimes has loud phone meetings at night," bemoaned Donal.

It's one thing to witness the occasional phone call or videoconference, but some people simply go from one to the next, with precious little respite. That's their day, every day.

Donal was stuck. Until, he told us, he invested in Apple's AirPods Pro. Oddly, he hoped the PR about them was true -- especially one large element of the PR.

"The noise cancelation," enthused Donal. "I've never seen anything like it."

"They have two settings," continued Donal. "So if I don't mind hearing a little of the outside world -- just in case he wants to talk to me -- I put them on setting one. But once he's in one of his crazy meetings, it's setting two and I'm out."

He insists he can sit just a few feet away from Donal and still be able to work. "I can actually design now," he said.

Personally, I can't bear the idea of having to wear headphones all day, let alone ones I have to insert in my ears. For Donal, though, it's this or divorce.

"We might have to be like this for months," he told us. "I love him, but there's no way I could survive without these things."

I suspect many people didn't entirely anticipate what their spouses and lovers were like. In their work version, that is. On Twitter, for example, I saw someone complaining they had no idea their husband was a "circle back" sort of person. How dreadful.

I suspect, too, that Apple never imagined its latest AirPods would be relationship savers, but times like these bring certain technologies to the fore, as others may struggle.

Cable TV is largely a waste of money -- no sports, no life -- while the likes of Netflix and Amazon Prime bring us new opportunities to watch something absorbing every day. I admit to being engrossed in Finland's "Secret Enemies" all week. I also admit to succumbing to comfort TV. Really bad comfort TV like "Midsomer Murders."

Thankfully, at the end of our virtual dinner party, Kevin hadn't had to take any calls. And Donal didn't have to put on his AirPods.

They're still an ugly look. Except on a desperate designer, of course.

AirPods Pro: Yeah, they are so good, but... SEE FULL GALLERY

Join Discussion for: He bought Apple's AirPods Pro. Now they're...