With more than €55m ($61m) invested in Catalan startups in the biotech sector over the first half of 2016, commentators are debating whether the new surge of funding is a blip or a trend.

"As a scientist, I deal with hypotheses, and one hypothesis circulating right now is that Barcelona is the next big thing. The place to be," says Jordi Naval, the managing director of the Fundació Bosch i Gimpera.

As someone running the tech-transfer and innovation office of the University of Barcelona, he is convinced that the Catalan capital could be a new Boston, because it has that same combination of universities, companies, and human resources. 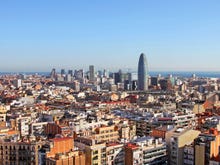 ​IoT beneath the city streets: Barcelona tests out open platform for smart services To manage the city's infrastructure centrally, Barcelona's council and supercomputing center, with Cisco and other technology partners, have just completed an innovative proof-of-concept platform.

"If you're an investor in life sciences, and this applies to other fields, and think of investing in biotech projects, you know that US projects are well-valued but expensive. Yet, in Barcelona, you've got great science and fewer competitors. So, in a certain way, your money is better invested and can have a better return," he tells ZDNet.

Recently, at the BizBarcelona congress, Naval, who is a cofounder of several startups in the biotech field, encouraged entrepreneurs to enter the digital-health ecosystem by emphasizing that the scientific publications ratio per researcher in Catalonia stands at 0.62, double the EU average of 0.30 in 2015.

"It's assumed that if you're good at producing scientific publications, much of this science has to be transferable," he says.

The Biocat Report, published recently by the body tasked with promoting the Catalan healthcare and life-sciences sector, suggests he's right. As of September 2015, the region of Catalonia had 499 tech companies in the biotech, medical-technology, and digital-health fields.

Once pharmaceutical corporations, professional services, consultancy firms, and research bodies are added in, that number rises to 734, some 222 more companies than those recorded in the 2013 Biocat Report. In terms of investment, between 2013 and 2015 bio-science firms in the Catalan region attracted more than €100m ($111m).

Biocat CEO Albert Barberà underlines that "all of these assets make the region a highly-competitive, innovative ecosystem that has gained importance compared with other leading European clusters, most of which it has collaboration agreements with".

Still, there are challenges to be overcome. Public and private R&D investment in the sector dropped nearly 11 percent between 2009 and 2014. Plus, "the use of big data for predictive analytics will transform the services provided, making them more focused on preventing than curing", Barberà says, and the sector has to be prepared for that.

"If we use data properly, we'll be able to transform medicine as a science and healthcare, both as an industry by introducing new stakeholders in technology, and as a service by moving to personalized medicine," he adds.

The final frontier: Inside the Barcelona incubator fostering next-generation space startups The European Space Agency's Business Incubator Center, located in Barcelona, aims to attract 40 startups by 2018 and foster the space industry ecosystem in the region.

His firm's platform, developed with open-source software, enables researchers to predict biological activity and understand why compounds work or how they bond with proteins, thus cutting the cost and time in the various phases of drug development.

The company is located at the Barcelona Science Park and Copenhagen Bio Science Park. "We chose Copenhagen to easily expand to Scandinavia and the north of Europe and because it is in the heart of the Danish-Swedish life science cluster Medicon Valley," Nonell-Canals says.

But he says Barcelona has huge academic potential, which creates an attractive environment for biotech companies.

"We still have few success stories. I would cite ORYZON. We need more investment, but the sector is growing and attracting more money. In addition, institutions, especially at the level of the Generalitat [Catalan government], are actively supporting its development," he adds.

Ana Maiques, CEO of Neuroelectrics, a company developing technologies to monitor and stimulate the brain to help patients in need, argues that on top of Barcelona's good universities, there is an entrepreneurial spirit, an excellent healthcare system, and a strong representation by the Spanish pharma and biotech industry.

"From a startup perspective, it gives us access to excellent hospitals to run clinical trials and, as a member of CataloniaBio association, a lot of industry peers from which to learn from," she says.

Yet, for the moment, Maiques still lives in Boston.

Join Discussion for: Here's Barcelona's cunning plan to be new...