In our tech-first a world is full digital transparency between couples actually required in a relationship? And how dangerous could our oversharing be?

If you are in a relationship, but are not married, do you share your passwords with your significant other? It seems that most Americans do.

The survey showed that couples share a variety of passwords with each other, and they most commonly share within the first six months of dating.

The most commonly shared passwords between couples are for video streaming (78%), mobile devices (64%), and music streaming (58%). Almost half (47%) of Americans in a relationship share social media passwords and 38% share their personal email passwords.

Most services, apart from social media and mobile device accounts (which are shared most with family), are more commonly shared with a significant other than family or friends.

Among those sharing video streaming services, Netflix (86%), Hulu (57%), and Amazon Prime Video (52%) are shared most with a significant other.

Millennials and Generation Z are also more likely to share passwords with their significant others across all platforms, as compared to older folks

Among people who do not share passwords with anyone, the most common objection is that the same username and password combination is often used for additional accounts

Overall, respondents are most concerned about personal data privacy in regard to sharing login information for mobile wallets (72%), personal email (68%) and social media accounts (68%).

Among respondents, men are more guilty than women of still secretly using an ex's login information / password post-break up: 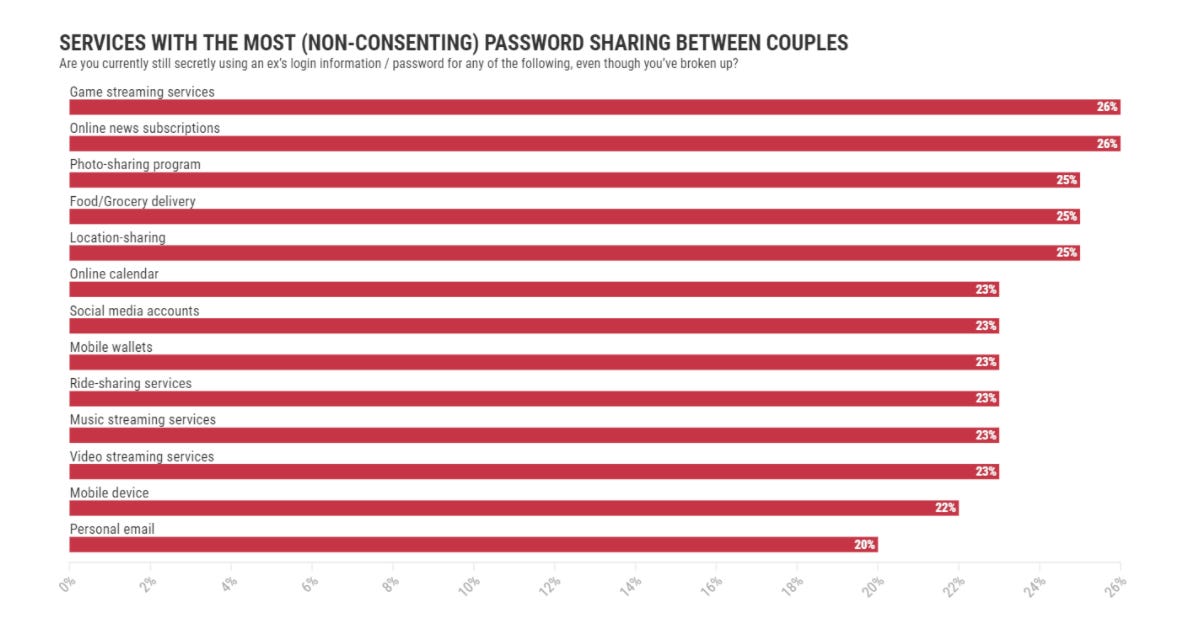 Over one in four (26%) currently use their ex's game streaming services account and online news subscriptions (26%). A quarter (25%) access their ex's photo sharing program, and food/grocery delivery sites.

One in four 25% of respondents confess to currently tracking an ex's real-time location and 30% confess to secretly logging in to an ex's social media account at least once, with 23% admitting to still doing so currently.

It is not surprising that over one in three (36%) of respondents indicate regret in sharing passwords with a significant other, either during the relationship or after a breakup—with men feeling more regretful than women (40% vs. 32%).

Harold Li, vice president, ExpressVPN said: "Unfortunately, password sharing can lead to risks beyond cybersecurity and potentially be used as a tool of coercive control or abuse in relationships."

Swapping passwords is a 21st-century rite of passage in a relationship but it seems to be a slippery slope to digital mistrust and could pose a serious threat to personal privacy and cybersecurity.

Join Discussion for: Here's how many Americans still secretly...