"My vision is simple... In the future all commercial action will be in cyberspace. But the cyberworld will need a ground base on this physical world."

It was this belief, expressed by Sheikh Mohammed Bin Rashid Al Maktoum, prime minister of the UAE and ruler of Dubai, back in 1999, which shaped the vision for the creation of Dubai Internet City (DIC). Part of the wider move to transform Dubai into a knowledge economy, DIC was launched in October 2000, with Sheikh Mohammed observing at the time that "this is Dubai's future".

"When DIC was set up," Majed Al Suwaidi, managing director of Dubai Internet City, recalls, "Dubai's ICT industry was still in its infancy and DIC had only 100 companies."

And with spending in UAE's ICT industry expected to reach $15bn this year, "Dubai Internet City has grown to become the Middle East and North Africa region's largest ICT hub," Al Suwaidi told ZDNet. DIC provides "a regional headquarters for industry leaders" while also hosting "companies from across the ICT value chain including industry giants and Fortune 500 companies Microsoft, Dell, Canon, and IBM, as well as SMEs and startups."

DIC offers numerous incentives for companies to set up their ICT business in the UAE. Located within the Dubai Technology & Media Free Zone, companies get total exemption from personal income tax for 50 years and corporate taxes for 50 years, 100 percent foreign ownership, no currency restrictions, intellectual property protection, and 100 percent repatriation of capital and profits.

Alongside the corporate incentives, many businesses - both old and new - also simply benefit from being in an environment surrounded by so many others in their field.

The everyday elements of running a business have also been taken care of: DIC tenants can access meeting and conference facilities, 50 retailers on site, broadband, and what DIC claims is "the world's largest commercial IP telephony network".

Although DIC is best known for being a base for major tech companies such as Google, AT&T, Intel, Oracle, HP, Cisco, and Siemens, it also plays host to a number of young businesses.

Some of these can be found at the in5 Innovation Centre, an incubation hub that is "a true success story for us," Al Suwaidi says.

Launched in May 2013 to support and encourage entrepreneurs and fledgling IT businesses, the centre "is now home to over 50 startups and provides infrastructure, access to funding, and a dynamic and engaging working environment to entrepreneurs," Al Suwaidi told ZDNet.

The startups can also avail themselves of training and mentoring opportunities, as well as access to business partners such as Microsoft, which provide Microsoft BizSparks software to startups.

The centre as a whole is supported by a steering group, focused on identifying "startups who will add value to the UAE's ICT industry". Members include senior personnel from organisations such as the Rochester Institute of Technology, online retail giant Souq.com, entrepreneur platform Wamda, and chipmaker Qualcomm.

Open to all nationalities, in its first year alone the in5 centre received over 500 applications for support, with startups being incubated for between three and six months, before being offered the chance to move to a dedicated location for startup graduates. 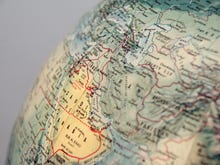 Five surprising facts about technology takeup in the Middle East You might already know that the area around the Middle East, North Africa and Turkey presents a diverse tech picture, but who's leading the mobile and internet pack - and who's trailing - may yet surprise you.

And it's not just in5's members who have been nominated for different awards, the in5 centre itself won the incubator of the year award at the Arabian Business Start-Up Awards in November last year.

"Dubai Internet City has shown that real sector and industry growth can be achieved through the creation of industry-specific infrastructure and facilities for companies of all sizes, and that with the right framework, support and business environment, companies can develop and expand, and start-ups can grow into thriving businesses," Al Suwaidi says.

Part of the challenge for DIC now is to maintain this growth and momentum.

"2015 will be all about innovation for DIC, as well as supporting the journey of startups beyond in5," Al Suwaidi told ZDNet. With that in mind, in the past couple of months the DIC has already hosted the Drones for Good competition, launched the Decode Dubai hackathon, and partnered with Google to help local businesses bolster their online presence.

Other priorities for Al Suwaidi include "foster[ing] the entire journey of startups once they have graduated from in5" and supporting emerging "trends within the industry, including the Internet of Things" and "Dubai's transition into a Smart City".

"We always look to international models for ways to enhance our offering in Dubai," Al Suwaidi says, "and I was fascinated to visit both Silicon Valley and startup and technology hubs in London recently."

"I was particularly interested to learn about the scale and sector influence of the events hosted at [the Canary Wharf based] Level 39," he says, "something we will look to emulate at in5, where we host a series of smaller-scale events."

In the longer-term however Al Suwaidi acknowledges that "the anticipated increase in manpower demand within the industry faces some challenges, primarily a shortage of critical skillsets."

Tackling this will be essential if the UAE's growing ICT industry is to continue to contribute to Dubai's wider economic growth, and Al Suwaidi is particularly keen to "bridge the gap between industry and academia."

For Al Suwaidi this means finding the "right framework ... to support the growth of talent within the sector" as well as ensuring that "talent and creativity are recognised within students, start-ups etc. and nurtured."

"This [is] something that we are strongly focusing on," he says. After all, he concludes, "it is important to provide support to all of those who would like to work in the sector."

Join Discussion for: Home to everyone from Google to the next...