In November, Dubai won its bid to host the World Expo 2020. The city beat competition from Ekaterinburg in Russia, Izmir in Turkey and Sao Paolo in Brazil. Although the decision wasn't widely reported around the world, here in Dubai, the city went crazy. 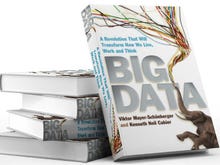 This book examines the state of the art in Big Data analysis and the associated risks, delivering a thorough and balanced account of a topical subject.

The announcement was made late evening our time, and within minutes, the world's tallest building, Burj Khalifa, was lit up by fireworks. Shortly after that, the ruler, Sheikh Mohammad bin Rashid Al-Matktoum, announced that all schools were to be given the day off in celebration.

The last-minute decision created a flurry of activity, as schools desperately tried to contact parents letting them know; messages flew around on email and text from schools, but in reality, the children were way ahead of the adults, and already contacting their mates with the news over BBM, text, and Skype.

So what does this mean for Dubai and the UAE? Well, the emirate will spend $7bn on the direct infrastructure it needs for Expo 2020 and it is likely to create around 277,000 jobs between now and 2021, when the six-month exhibition finishes.

It means more people coming here to live and work, more visas being processed, more companies bidding for work or supplying services and as this business activity increases, quietly in the background, it means data. Lots of data. Data on spending, on new residents, on schemes to prepare for the Expo, on the utility needs this sudden growth creates and so on.

For the IT industry, the surge in the data that companies want to analyse means more demand for software, hardware and services.

Dubai and the wider UAE recovered pretty quickly from the economic downturn.  It kept spending on big infrastructure schemes and benefited economically from some of the tragedy happening elsewhere in the Arab world, as people fled conflict to set up home here. So, in big data terms, technology companies were already highlighting the UAE as among the fastest growing in the region.

Expats, for instance, have to send their children to private schools over here, as state schools are open only to locals. The emirate's Knowledge and Human Development Authority, which oversees education, says there are 153 private schools in Dubai, educating more than 225,000 students across 15 curricula (such as the English, American or Indian national curriculum).

So, as the emirate's companies employ more people, you can guarantee that those who run the private schools are crunching the numbers as they try and estimate how many extra places will be needed over the next seven years, in which curricula they are likely to enrol and seeking trends in educational practices that can be adopted as they accommodate the rising student population. And so it will be for every other industry.

The UAE, it added, "has been at the forefront of business analytics and big data adoption across the Middle East".

The company said 58 percent of CIOs cited governance, regulation and compliance requirements, transparency, and reporting as key reasons for investing in big data and analytics technologies.

EMC research also points to growing awareness of data analytics in the UAE. Its survey among 237 IT decision makers in the country found that 87 percent of respondents thought decision making within their company could be improved through better use of data, with 67 percent saying that senior managers trust the insights such analysis provides when making important business decisions.

Further, 45 percent felt they had gained a competitive edge over a rival through big data analytics, with 67 percent stating that organisations that use such tools will be the ones that succeed. However, 27 percent of those surveyed said they have no plans to use big data technology and 57 percent said the lack of a clear business case or proven return on investment was the most common reason for not adopting it.

So, while a quarter of companies are yet to be convinced, big data has the attention of the region's IT heads. It is more a case of coming, rather than arrived, but is still good news for all those involved in the industry. Third-party data centres for instance, are still an emerging industry in the Middle East, albeit now in the latter stages (and in the UAE, established).

UAE neighbour Saudi Arabia, for instance, is also investing heavily. It has some pretty strict rules about where data can be held and as the region's engine of growth, datacentres could become big business. IDC reports that by the end of this year, the kingdom's IT spending will have reached $1.09bn, up 15.1 percent on 2012. Much of that is going into datacentres and IT as a service business models.

So a growing economy is positive for future business, but it is likely to quickly uncover the fact that while data sets grow, the skills to analyse it, at least initially, won't keep pace. Big data analytics isn't all about the technology; it requires the human touch too. It is humans that set up the analysis and humans that through cognition, interpret the data.

While the regional big data industry is firmly fledgling at the moment, it is expected to see high percentage growth in the next few years. And that also means a period of opportunity for the analysts, particularly those who can quickly adapt their skills.

There is, I think, a measure of overconfidence around big data in the region, highlighted to a degree by the EMC's survey, where 79 percent of UAE-based respondents said their company had the right skills and knowledge to complete business priorities successfully and an equal number said it would be a challenge for skills to keep pace with IT innovation over the next three years.

But expect Dubai and the wider UAE, and in its wake the richer industrialised countries, to be able to attract the people who can take big data and turn it into intelligence.