It has requested for government to seek industry consultation before any internet restrictions are made.
Written by Campbell Kwan, Journalist on Aug. 28, 2019 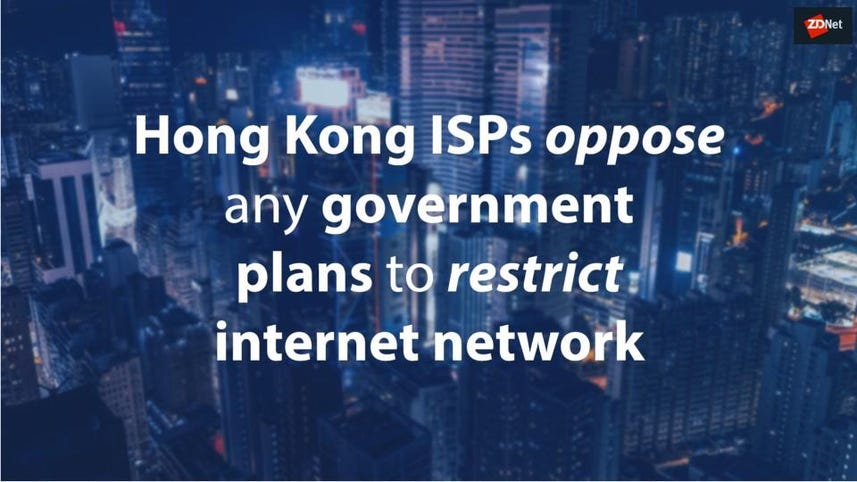 "HKISPA would like to warn that, imposing any insensible restrictions on the open Internet would only result in more restrictions, as the original restrictions wouldn't be effective, and ultimately the result is putting Hong Kong's Internet behind a big firewall," the organisation said.

"Therefore, any such restrictions, however slight originally, would start the end of the open internet of Hong Kong, and would immediately and permanently deter international businesses from positing their businesses and investments in Hong Kong."

It has also requested for industry consultation before any internet restrictions are made, saying that a restricted internet network would ruin the island's reputation as being a finance and telecommunications hub in the Asia-Pacific Region.

Unlike China, where all connections must go through its Great Firewall, Hong Kong's internet currently operates under an open network.

HKISPA's statement was in response to reports by Hong Kong media that the local government has discussed plans for the issuing of executive orders to internet service providers to selectively stop some internet applications.

Hong Kong is currently mired in protests that have now lasted over 80 days. The protests initially arose due to opposition against an extradition bill raised by the government of Hong Kong, but it has since grown into a rally for greater democracy.

An underlying feature of the Hong Kong protests has been the way it has extended onto the internet. The internet and social media applications, such as Telegram, have been used by Hong Kong civilians to spread fervor and organise protests. For example, Telegram played a central role in a protest that took place last week, with protesters forming a human chain across the city on the 30th anniversary of the Baltic Chain demonstration from 1989.

With the internet being used by civilians as an instrument for rallying support, China has allegedly worked to limit the influence of Telegram. Back in June, the messaging platform received a "powerful" DDoS attack from IP addresses that were primarily located in China.

China has also created thousands of Twitter accounts for the purpose of "deliberately and specifically attempting to sow political discord in Hong Kong". 936 of these accounts have since been banned, and Twitter has stop accepting ads from state-run media organisations.

The company's CEO has confirmed the timing coincided with the Hong Kong extradition law protests organised on his platform.

The listing could occur as early as the second half of 2019.

Amazon says the new cloud service entry has been prompted by demand by enterprises and government organizations.