How humans and technology conspired to spoil the World Cup Final

The new Video Assistant Referee was supposed to ensure correctness in vital decision-making. It didn't.
Written by Chris Matyszczyk, Contributor on July 16, 2018 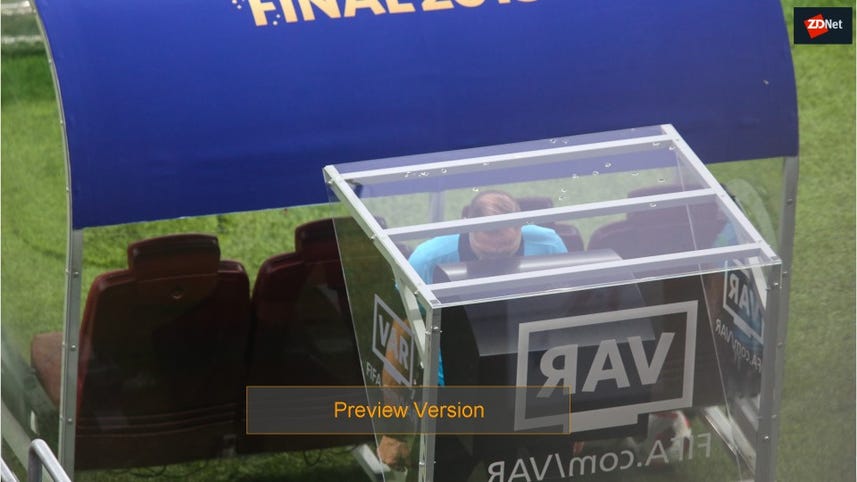 It was a wonderful World Cup.

Save for Vladimir Putin walking in the rain, covered by an umbrella, while the presidents of finalists France and Croatia got soaked.

However, for those who adore football -- aka saacker -- technology invaded like never before.

CNET: How to replay the World Cup Final

It was, largely, a welcome invasion.

Goal-line technology -- available in tennis since the turn of the century -- finally meant that all the goals scored would actually count.

Moreover, the Video Assistant Referee was there to make sure that referees on the pitch blew their whistles in the right direction.

Mostly, it worked. Except, that is, when it came to Sunday's final.

The greatest World Cup Final referees are the ones you never notice. They let the game flow and, when they have to make a call, they make the right one.

Not only was he greatly experienced, but he had the blissful backup of technological help -- an Italian referee staring at multiple screens in a small Russian room, ready to warn him of things he might have missed.

How woefully it all worked.

In the first half, Croatia was by far the better team.

There's no more appropriate word for it.

He sought out an opponent's foot and attempted to deliberately trip over it.

This was a moment when technology could have helped.

One whisper from the video referee to the one on the field would have told him that Griezmann deserved a yellow card.

Instead, the referee on the field gave France a free-kick -- the previous action was deemed not reviewable, according to the current rules -- from which a goal ensued.

Croatia got back into the game and scored a wonderful goal.

And then, near the end of the the first half, the ball came across, France's Blaise Matuidi mis-headed it and it hit the hand of Croatian striker Ivan Perisic.

Perisic has his hands in a perfectly normal position. The referee decided there was no foul, yet the French players started whining.

And then the video referee asked Pitana to take a look at the replay.

For all the world (well, me), this was no penalty. The criterion for handball is that it's supposed to be deliberate. Perisic didn't have time to do anything but let the ball hit his hand.

It is, for sure, a gray area in soccer, but technology is supposed to turn that gray to black-and-white. Or at least a much more defined shade of gray.

The problem, however, was that Pitana being alerted to watch it again (and again) -- rather than being told one way or the other what the decision was -- told him that he might have made a mistake.

Already, he was in troubling territory. Then he had to watch the replay in front of all the world, with French players and fans shrieking in his ears.

He succumbed, despite the eyes of many seeing the absolute obvious: This was no penalty.

Yet Pitana gave the penalty and Griezmann scored.

We had, therefore, one incident where technology could have saved the referee and one where the way it was being used forced him into a situation where he changed his mind, under enormous pressure.

I am, though, saying that the technology and humans conspired to make two wrong decisions, both in favor of one team.

The decisions unquestionably altered the mood of the game. They allowed the French to enter the half-time break in the lead, when some might say neither of their goals should have stood.

They also showed a fundamental weakness of the technology-human continuum.

In many sports -- baseball, for example -- once the verdict is appealed to technology it isn't the referees or umpires on the field who make the call.

It's the referees and umpires in a small room who aren't facing the personal, intimate pressure of, say, 81,000 people -- as it was in Moscow's Luzhniki Stadium.

Here, Pitana had to watch the screen on the side of the pitch, with a live audience and a heap of pressure, and make the call himself.

The result was pitiful.

I can offer evidence for my claims.

In the FOX studio at half-time, renowned and respected Dutch coach Guus Hiddink was appalled that the penalty was given. Renowned American former player and blowtrumpet Alexei Lalas insisted it was a penalty.

The promise of technology is ease and perfection. Silicon Valley tells us this all the time.

But the way humans use it matters so very much.

They can interpret it badly. They can have the wrong people making decisions on the basis of the wrong interpretations and under the wrong pressures.

Soccer will, one hopes, learn from this final.

France won, but many people are talking about the use of technology, rather than the use of excellent players blended into a team.

Which is a pity.

Innovation
Stream millions of podcasts and over 100,000 radio stations from around the world