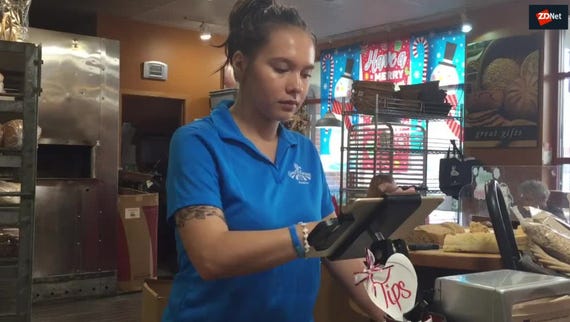 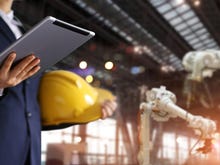 Special Report: The Rise of Industrial IoT (free PDF) This ebook, based on the latest ZDNet / TechRepublic special feature, explores how infrastructure around the world is being linked together via sensors, machine learning and analytics.

The ongoing digital transformation of manufacturing is having such a dramatic impact that it's been dubbed the 'fourth industrial revolution'.

This revolution has just begun, but it is already changing how businesses operate. In the fourth industrial revolution, big data, analytics and digital technology will play a number of roles, from improving energy usage to making manufacturing safer.

Steven Martin, chief digital officer of GE Power at GE, said, "I think this is a thousand-day journey, relatively speaking, and we're at day number three. We are very, very, very early on. We've barely scratched the surface in terms of what can be done."

What is the Fourth Industrial Revolution?

While the term 'fourth industrial revolution' has been tossed around for a few years, there are various definitions. In Germany, it's often referred to as Industrie 4.0, or Industry 4.0 worldwide.

Gillan Taddune, CEO of Banyan Water, said, "IoT technology is the fourth industrial revolution. For the previous two and a half centuries, technological advancements like steam-powered manufacturing and nuclear and electrical energy production have relied on the massive consumption of water. With IoT advancements, we now have the ability to save water and other essential resources instead of haphazardly consuming them. As the global population continues to grow, as food demand increases, as infrastructure ages and as climate change worsens, IoT technology as a method of resource optimization and conservation may very well be the thing that saves us all."

Michael Kanellos, spokesperson and analyst for OSIsoft, said, "It's about using data as a driving force. The first wave involved mechanization and steam power -- we were going beyond what you could do with human or animal labor. The second wave involved mass production. The third: robots and mechanization."

"The difference between the third and fourth can be elusive. Think of the third generation as basic robotics. Machines were developed to weld precisely -- the first robots went in in 1962 -- and SCADA systems and other computers were used to control and monitor processes. In the fourth wave, we're adding layers of efficiency and intelligence on top of what's being done. In the fourth wave, a welding robot will be able to effectively tell you, or another robot, that it's having problems and get fixed," Kanellos said.

Tom Schiller, CEO and founder of FacilityConneX, said he sees the fourth industrial revolution as, "a new era in which technological advancement and incorporation of IoT/IIoT, cloud technology and increased collection, processing and use of data is becoming more prevalent for a number of industries -- particularly within the industrial sector. For the first time, we are able to communicate with and understand these technologies and the data they're providing."

How important is the Fourth Industrial Revolution?

It is imperative for companies to adopt new technologies in the fourth industrial revolution in order to survive, according to Chuck Byers, CTO of OpenFog Consortium.

"Almost every aspect of business will be profoundly changed by digitization and the IoT. Efficiency will increase, quality will improve, innovation will accelerate, costs will drop. Companies late to adopt fourth industrial revolution, digital enterprise or IoT techniques will be left in the dust by competitors that got it a bit sooner," Byers said.

What does IoT really mean?

Kanellos said, "IoT is really about two technology worlds -- OT and IT -- colliding. In most industrial companies, they have existed as separate, semi-autonomous departments. They each have their preferred vendors (SAP, Microsoft in IT; OSIsoft, Emerson, Rockwell in OT) concerns (efficiency in IT; explosions in OT) and different goals (lowering costs in IT; reducing downtime in OT). One sits in an office. One sits behind razor wire. They don't talk much and, when they do, they often dislike each other. But now they have to."

"When it comes to IoT, there's a lot of disagreement too. When IT people think of IoT, they think of using machine data to cut energy, predict maintenance issues, improve return on capital. OT says 'we've been doing this for years'. To OT, 'IoT' usually means adding secondary devices that add to what they already do. Luckily, OT is getting off its high horse and I predict that 'IoT' will simply mean using data to solve problems -- that is, what they've been doing for decades, but on a bigger scale."

Where will the real value in IoT be seen in industry?

Martin said, "I tend to think that the real value is going to be seen at the network level optimization. Where I don't think about optimizing that particular asset, I think about a higher-level function, going back to running a different part profile to a manufacturing plant for a day based on the yield, or based on the need, or the output for the customer and what's available for logistics. That's not necessarily getting the most out of that asset. That's about getting the most economic yield out of an overall opportunity where you do factor in economics."

Economics will play a major role in the fourth industrial revolution. "It's not just about the sensors and the data conductivity. It's understanding the value and then making decisions on how to optimize that hardware based on the economic reality," Martin said.

How is IoT impacting the Fourth Industrial Revolution?

The biggest way that IoT is impacting industry is by creating new opportunities for industries to collect data and accurately analyze it, Schiller said. Pat Kennedy, founder of OSIsoft, said that in industrial settings, determining potential equipment failure is greatly enhanced by the use of data.

"What IoT does, it's not a new way of bringing in data, it's just a much wider scope of data. You get data from everywhere, from every sensor, from every piece of equipment. And that's really where you see the difference," Kennedy said.

For instance, big data can be used for predictive analytics to help companies reduce maintenance costs -- for example by determining if a machine will soon require repairs simply by measuring the millions of vibrations that the equipment produces in a day. If any measurement is the slightest bit off, it could mean the machine is about to break down. By fixing it in advance, it can save a company from the high costs of an equipment malfunction on the production line.

What are the top future IoT trends?

According to Kathy Nelson, director, technical product marketing and industry relations for Ondas Networks, the top trends in the next five years will include: increased edge processing and system control in Critical Infrastructure Industries (CII); massive increases in data, and CIIs trying to figure out how to analyze it in useful ways; and cyber and physical security.

Cyril Perducat, executive vice president of IoT and digital offers for Schneider Electric, said he believes some of the top trends will be greater adoption of AI, along with a continued shift to the edge.

"As the IoT drives the need for data processing closer to the source, life-critical data that powers driverless cars and provides ambulance routes, and business-critical data that powers app experiences for retailers, will increasingly be processed through edge computing. But the cloud still needs the edge, and edge certainly needs the cloud. The goal is to find the right balance," Perducat said.

Paul Appleby, CEO of Kinetica, said some of the top IoT trends are grids or networks as ecosystems, not monostacks, as well as smart wearables and using smart home devices to monitor energy usage and improve the environment. "There are a host of enterprising environmental initiatives like this that will make a huge impact as more people, devices and things join the IoT in the next five years."

What are the trends in IoT security in industrial settings?

Nelson said, "With the exponential increase in sensors deployed on CII networks, there is an exponential increase in the number of points hackers will have to access CII networks. As decisions are made over the next year or years, it'll be important to ensure those sensors and their supply chain are secure. Knowing where components come from and understanding the security of those devices will be critical. There will have to be greater integration and interfacing of IT and OT for this to be effective."

Schiller added, "Many industrial companies are scared to send their data to the cloud -- opening a port or installing a VPN puts a vulnerability in their network. So we will see more of the security companies build and deploy secure tunnels. There are many start-ups doing this right now and none of them are dominant. The protection of this connection is critical for the adoptions of Industry 4.0 and accelerating the value companies will get."

"When you connect everything, you multiply your threat vectors by orders of magnitude with each additional network connection. This is as true in a telco as it is in a bank, on the grid, or at air traffic control. Insecure connectivity is one of this century's greatest threats to date, with devastating economic as well as human costs if we don't solve the incredibly complicated Rubik's cube in hand. The only way to minimize these threat vectors is to harden both points of entry: the data center as well as the device," Appleby said.

4 ways leaders can prepare for the coming Fourth Industrial Revolution (TechRepublic)
Successful leaders of Industry 4.0 must be committed to doing good and aggressive in developing their workforce, according to a Deloitte report.

How IBM Watson is revolutionizing 10 industries (TechRepublic)
The use of artificial intelligence and Internet of Things is increasingly becoming a reality for businesses. Here are ways IBM Watson AI and IoT are being put into practice in 10 industries.

Smart machines, pervasive intelligence key for Industry 4.0 and beyond
Manufacturing facilities of the future are expected to take full advantage of what artificial intelligence has to offer.

Join Discussion for: How IoT will drive the fourth industrial...