​How professional cycling is being taken up a gear by technology

Trek-Segafredo is using technology to change how the team operates. Here's how.
Written by Mark Samuels, Freelance Business Journalist on Sept. 14, 2017 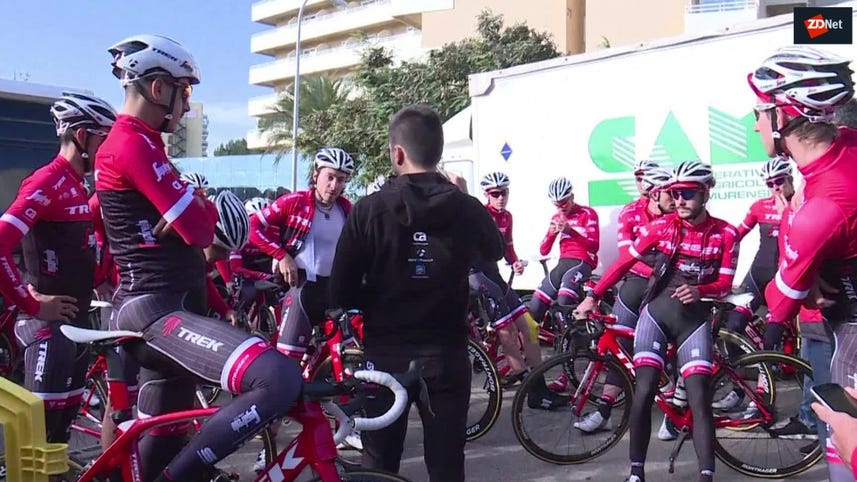 It might not come as a surprise to hear the clever combination of software and data can help professional sports teams gain a competitive advantage. What might be unexpected, however, is that cycling has in many ways has been slower to embrace digital technology than other high profile sports.

Political complications mean it is tough to create agreements about the use of technology across the teams, international federations and race organisers that run the sport. And when it comes to culture, well, cyclists are more interested in riding and racing than bits and bytes.

These factors mean digital transformation in cycling, has until recently, remained in the slow lane.

Further evidence of the sluggish pace of change comes from Peter Simpson, vice president of European marketing for CA Technologies, whose company started working with the Trek-Segafredo cycling team boost its performance through technology last year. What he discovered on first working with the business was that employees were managing logistics and operations using Excel spreadsheets.

This reliance on spreadsheets created a challenge for the team. Trek-Segafredo employs 90 people including 30 riders and 60 staff. At any one time, these individuals can be split across multiple continents, working on as many as three of four professional cycling races. Using spreadsheets to manage the movement of people, bikes and equipment around the world was effective but inefficient.

The past year, however, has seen a radical change in direction. The benefits of embracing digital technology are already being seen.

Trek-Segafredo riders and employees use CA's Flowdock, a secure collaboration application that allows everyone in the organisation to share information in real-time and to hone performance.

The team is also using CA's Project and Portfolio Management technology to help centralise the management of resources across events. Rather than having to rely on older systems and services, Trek-Segafredo riders and employees can track and trace racing and operational activities through a mobile application. The technology-enabled change in focus, says Guercilena, is significant.

"We can control a rider's training by phone," he says. "I can login and see how a cyclist is performing each day from anywhere in the world. We have coaches that analyse cadence, watts and heartbeat daily. This report helps us to ensure the performance is right and that we're not over-training. With analysis, we can now really avoid making critical mistakes."

Guercilena looks back on the introduction of technology into the sport, and its recent adoption and adaptation at Trek-Segafredo, and recognises the digital evolution in cycling is fast becoming a revolution. "Technology is quickly becoming a key element of cycling success," he says.

It is a sentiment that resonates with Ivan Basso, former cyclist and now sport director and development manager at Trek-Segafredo. Basso, who is a former Grand Tour winner, understands better than most how cycling is finally beginning to embrace technology. Most interestingly of all, he says long-standing cultural barriers are being overcome.

"The new generation of cyclists are now much more digital," says Basso, who helps develop the team's up-and-coming cycling prospects. He recognises the role of technology within cycling has deepened recently. In fact, Basso says most key developments in the sport are increasingly technology-related.

"Now, with just an app on a smart phone, you can see how you are performing and what kinds of challenges you will encounter during the race. With one application, you can control everything - it's easier and smarter. And when it's good for you as a rider, it's good for the team," says Basso.

Technological innovation in cycling remains a work in progress. The Trek-Segafredo and CA partnership has recently been extended through 2019. The aim, says Guercilena, is to use automation across other areas of the team's activities, including rider performance. "We're very demanding - we want all the biometric, medical and training data on a single platform," he says.

The next step beyond that, says Guercilena, is algorithm-based software that helps the team automatically match its riders and resources with the global race calendar. The aim of this development would be to create a level of process automation that helps the team cope with unexpected challenges, such as rider injuries.

Each cyclist is supported by a team of specialists, including mechanics, coaches and cooks, preparing special diets. These activities take place and overlap each other in three or four locations simultaneously. Managing these activities is a complex and challenging task that could be improved significantly through technology.

"When a rider has an injury, there's a world that's moving around him," says Guercilena. "We spend too long on processes right now and the goal is to have an automated view that helps us supervise all the changes we make at a race. We want software to make sure we have everything under control. I want our people to be focusing on helping us win, not worrying about logistics."

Guercilena says his team's digital transformation during the past 12 months has demonstrated the potential game-changing power of technology adoption. "The more we share information, the more we realise we're fully committed to technology and there's still a lot more we can do to get better," says Guercilena.

"Technology is helping my staff to be calm and to enjoy the fact that everything is in control. All they need to focus on is helping us meet our primary goal, which is the highest possible level of performance. Technology is now helping to make our riders stronger, faster and more likely to win races. And, increasingly, we'll be able to ensure that happens through a single app."