How Tottenham Hotspur is building the intelligent stadium of the future

CIO Strategies: How is technology helping to create the sports venue of the future?
Written by Mark Samuels on July 18, 2017 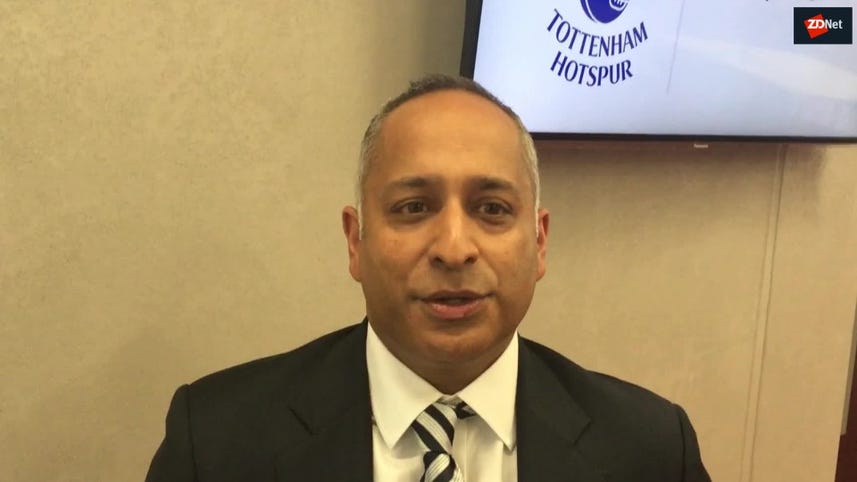 As the head of technology at Tottenham Hotspur Football Club, Sanjeev Katwa has a dual role. He is responsible for both establishing the ongoing IT strategy for the Premier League club and for delivering systems and services for Tottenham's new stadium, which is due to open in 2018.

Here, Katwa outlines his technology vision, the importance of customer experience and his long-term plans for success.

Sporting success is measured in victories and titles. Yet while achievements on the pitch are paramount, leading sports organisations are investing huge amounts off the pitch to help their businesses grow. Katwa says technology is crucial to sustained growth.

"The great thing about Tottenham Hotspur is that the work we do is more than traditional IT -- the club recognise we're a modern technology function," he says. "I've spent quite a few years in football and I think there's only a few clubs that make sure technology is one of the most important functions. My accountability is to the board and it's crucial than I'm aligned with them."

Before joining Tottenham in 2014, Katwa was IT director at Manchester City Football Club. His experience also extends to the media and entertainment industries, with senior technology roles at Sony BMG and MTV. His knowledge will be crucial as the club continues to develop its new home.

"When you start with a blank piece of paper, and you decide to build a brand new stadium, then you have an opportunity to design and build your technology platform from scratch," says Katwa. "Technology is a key part of the design of this new building, from equipment rooms to cable runs. We're not just bolting on technology -- we're making it part of the fabric of our intelligent stadium."

The club's new ground will be the largest football club stadium in London, with a capacity of 61,559. As well as being home to Tottenham, the arena will host other major entertainment events, such as NFL games and music concerts. Katwa and his fellow executives are keen to use innovation to help keep customers happy and the new stadium will be technology-enabled from the ground up.

"Changing the customer experience is going to be key for us," he says. "We want to transform how fans feel about coming to a sports venue. That means creating an infrastructure that is scalable, resilient and secure. What we need isn't something that's right for year one or two. We need a technology platform that scales as we move forwards."

Katwa says efforts to keep fans entertained are already in progress. While the cranes helping to construct the new stadium still loom large over White Hart Lane in London, the club is dedicating specialist resources to digital and marketing to find ways to help build what Tottenham hope will be one of the most technologically-advanced stadia ever built.

"We have a research team that do a lot of work in this space," he says. "When people come to the ground, we want fans to arrive early. Transport is one issue, of course. We also want fans to spend money on good quality food and drinks. We want to give them engaging content to keep them interested. And we want to develop other experiences, such as the museum and the shop."

The vision is very different to the traditional role of a football stadium. Rather than creating a place where people come together to watch a match for 90 minutes, Katwa and his executive colleagues want to create a venue where people from around the world are happy to spend time and money. "We're trying to make the ground a destination," he says.

That sort of experience relies on a good understanding of customer flow, both in terms of coming into the ground and getting served inside the stands. "These are fundamentals that we want to get right -- and technology can play a key role in these objectives," he says, referring to tools and trends, such as analytics to help learn about customer behaviour and to offer personalisation.

The club has already developed a virtual reality suite in its Lilywhite House offices, close to the ground. The suite highlights some of the forthcoming features of the new stadium, including Tunnel Club, which will allow a select group of supporters to eat Michelin-calibre food while watching players prepare to go out on to the pitch before kick-off.

"If marketing or hospitality want to offer something different, we've got the backbone in place to help them do that," says Katwa. "We've designed for scalability. From a technology perspective, we just want to meet the business requirements because we know they're going to change on a regular basis."

Katwa says a recently-announced partnership with Hewlett Packard Enterprise (HPE) will help the club to meet its goals. HPE is providing IT networking and wireless infrastructure for the new stadium and the provider was selected after a rigorous procurement exercise.

"It's been a journey to get to this point," says Katwa. "We started talking to HPE a long time ago, but to do a project like this you have to prepare really well." Being able to draw on strong internal and external capability is just one part of the challenge. Katwa recognises that integration of both people and technology is a key concern, especially when it comes to a grand construction plan.

"We realised that we would be running lots of individual projects," he says, looking back on the initial procurement exercise. "Two years ago, we spoke with HPE about what integration might mean and the need to avoid creating pockets of technology. What we've started to do is to bring technology and data together to help us make decisions."

HPE is working with Tottenham across all components, including mobile services and applications. The partnership also extends to key facilities management areas, such as access and building control. The new stadium will include LED signage, public wi-fi access, mobile point of sale, and click-and-collect food and drink systems.

"It's a great experience to be involved in designing and building a new stadium - and we're still on a learning curve, too," says Katwa. "We're already thinking about how we take our developments to the next level. Digital for us is about engaging with our global fan base, be that for football, NFL or concerts. It's an exciting journey -- and the hard works starts now."