Founded back in 2007, Connecthings aims to transform the public's urban experience by connecting smartphones to city services via NFC tags, QR codes, Wi-Fi and iBeacon management systems. The company's technology now operates in 20 European cities, as well as in Rio de Janeiro and New York.

Beacons are small, often battery-powered radio transmitters that send out data using technologies such as Bluetooth Low Energy to the smartphones of nearby users. The Connecthings cloud-based, tag- and beacon-management platform orchestrates the flow of information between, say, bus stops and travellers' devices.

Over the past eight years, Connecthings has grown rapidly in the European Internet of Public Things field. Now the same ambition fuels Anthoine's relocation to America. A recent €9.5m ($10.16m) funding round specifically for this expansion should also give Anthoine confidence that Connecthings can establish itself in the US, too.

Connecthings Corp has just been incorporated as a US company, with Anthoine as CEO leading the firm's development efforts from its New York base in January.

"We're building a team in the US to support our development plan. This is a long-term investment and it demonstrates how serious and committed Connecthings is to deploy its open beacons platform in the US specifically, but also in North and South America," she says. 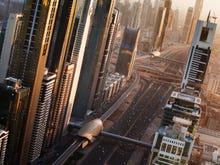 Dubai thinks big with plan to turn itself into a wi-fi connected smart city A plan to blanket Dubai with wi-fi and introduce smart systems to underpin education, healthcare and other public services is getting underway.

The investment comes from three places: Xerys Funds, French Siparex Group and Calao Finance. The Siparex and Calao are previous investors in Connecthings, having participated in the first round of funding in 2012.

Both believe that by developing its global platform as early as 2007 the company pioneered by understanding, before anyone else, the enormous market potential of the Internet of Things and smart-city applications.

Calao Finance partner and co-founder Rodolphe Herbelin says: "According to several studies, the number of connected objects is expected to average 80 billion in 2020, compared with only one billion five years ago."

Connecthings has won many awards since its inception, which Anthoine says have helped to establish the knowhow and capabilities of her young company. Perhaps the most significant boost to the company's early development was winning the Concours national d'aide à la Création d'Entreprises Innovantes in 2008.

"I'd like to stress how important it was for Connecthings to win this award. It brought us recognition of our project vision from experts and professionals and gave us access to the seed funding we needed to start the development of our now multi-award-winning SaaS platform," she says.

In New York, the 1-Touch NYC system allows travellers to interact with public information. By touching a smart poster with a smartphone, real-time information about the next bus or train is immediately available, as are details about the nearby monuments and city bike services. Accessible from every smartphone on the market, it is available in two languages, English and French.

This service is essentially the same as the one running in Montpellier, Nice, Bordeaux, Caen, Strasbourg and Toulon. These cities are, what the company calls, its "most emblematic" projects.

Connecthings has also partnered with Barcelona, Madrid and, more recently, Valencia. Smart-city services are also gaining traction in Milan and Berlin where it has offices.

Bordeaux, renowned for its smart transport systems and at the forefront of France's digital aspirations, generated more than three million mobile timetable consultations and engaged with over 150,000 unique users in the first year of Connecthings' services running.

Internet of things: Sillier and scarier and coming your way How many software updates does it take to change a light bulb? What happens when a blast furnace gets hacked? Seriously: Security looms as the elephant in all of our IoT rooms.

The system can also help those with disabilities navigate around the city. "In Strasbourg, Connecthings is developing a mobile solution to help visually-impaired citizens be vocally notified when the next bus is approaching and of its final destination," Anthoine says.

The growing impact across Europe and now potentially on New York, ninth in the world and the most populous city in America with 18.5 million inhabitants, has garnered the company a great deal of attention from other US states.

"We have received many requests and invitations from top US cities and large municipalities. Being now physically in the US will be tremendously helpful to support our development," Anthoine says, adding that the recent funding will help accelerate the deployment of the company's "open and scalable" beacons network.

"Our expertise is in our ability to manage very large numbers of beacons, in real-time, across cities and countries," she says.

"Our platform is open for cities, transport, tourism and brands. But, most important, it's open to a larger ecosystem of innovators and developers who are now shaping the next generation of smart-city services."

Join Discussion for: How this French IoT startup has designs on...