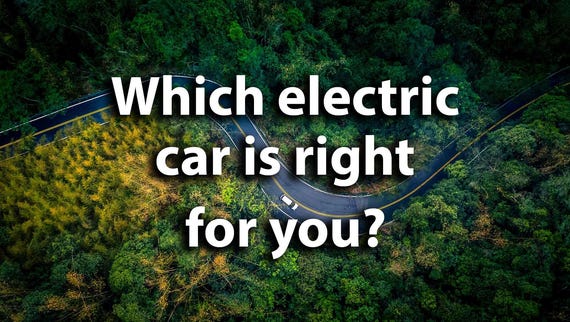 Which electric car is right for you?
Watch Now

Buying a car is a complicated decision, and the calculations get even more convoluted when you add electricity to the equation. The big variable comes in the form of two questions: Where do you plan to drive your electric vehicle? And where are you going to charge it?

After I sorted through all the options for the battery electric vehicles (BEVs) I was considering, I decided that none of them made sense for me. (I'm getting a Plug-in Hybrid Electric Vehicle [PHEV] instead.)    But my decision, as I explained last week, has a fair amount to do with the geography of the Southwestern United States, where I live. For those who live in densely populated areas on the West Coast or in the Northeast, the math is very different.

It all comes down to network effects. Charging networks, to be specific. The availability of reliable, affordable places to pump electricity into your BEV matters a lot when you're on a road trip, and it's the reason why, for many people, Tesla is the only logical choice in that category right now.

Where will you charge?

If you use an EV mostly for local driving and commuting, you can probably charge at home (usually overnight) or at the office. Charging at home offers the best rates, by far, especially if your utility company offers lower rates for off-peak usage.

Home charging uses your local utility connection, at the same rates you pay for powering lamps, appliances, and computers. With a Level 1 charger that plugs into a 120V outlet, you can charge a vehicle, but very slowly. For a BEV with an average battery, that will take a long, long time, too long for any but emergency situations. That's probably a suitable option for a PHEV with a range of 20-50 miles, which can easily get to 100% overnight.

Level 2 chargers require a 240V outlet but charge dramatically faster. As a rough guideline, figure that you can add about 25 miles of range for each hour of Level 2 charging. Even a car with a 300-mile range can probably get back to 100% after an overnight charge. (You can install one of these in your garage for about $600 plus labor, and they qualify for Federal tax credits.)

For road trips that are longer than the maximum range of your vehicle, you'll need to locate DC fast chargers that operate between 400V and 1000V and can charge a vehicle from 10% to 80% in a half-hour. And there's where the charging network becomes crucial.

Let us stipulate, right up front, that Tesla's Supercharger network is the gold standard. Introduced in 2012, this worldwide network now has (according to Tesla) 1,971 Supercharger stations containing a total of 17,467 chargers, an average of nearly nine stalls per station. (That's an increase of nearly 50% in the number of stations and close to 60% in the number of charging stalls in the past two years.)

In the United States, Tesla boasts that it has "the world's fastest charging network," which is not an unreasonable claim. Tesla's network blankets major urban areas and covers the U.S. Interstate highway system such that you can get just about anywhere in the Continental U.S. dependably.

The map below tells the story at a glance. Supercharger stations are indicated by red pinpoints in the map below. I'm more impressed by the gray markers, which show planned expansion.

Outside the U.S., Tesla has an equal edge. The European network is remarkably complete and Tesla's map for China also shows good Supercharger coverage. That means you can travel between major metropolitan areas on either continent using Tesla's network, without a lot of anxiety.

Tesla's software is a big help here. You punch in your destination and it maps out the trip for you, calculating how long you need to charge at each stop to make it to the next Supercharger.

Every one of those Superchargers is capable of charging a Tesla vehicle, and only a Tesla vehicle, at its maximum rate, or close to it. And Tesla has a significant number of so-called destination chargers as well; these offer Level 2 charging and are positioned at restaurants and hotels, where guests can charge up during longer stays or overnight.

And what if you don't have a Tesla?

If you own a BEV with a manufacturer's nameplate that doesn't say Tesla, your options are considerably less robust.

EVGo, founded in 2010, claims to have "the nation's largest public fast charging network for electric vehicles," with 800 fast charging locations in 34 states. That's less than half the size of Tesla's network, and they define fast charging as "50 kW or greater," which means you might find yourself waiting three times as long as a Tesla owner would to fill up. In Judy 2020, the company, in partnership with GM, announced plans to triple the size of its fast charging network, adding 2700 new fast chargers in the next five years.

The Electrify America network, which was born out of the settlement from Volkswagen's diesel emissions scandal, has 444 stations nationwide today, many of them at Walmart stores, with 1,971 DC fast charging stalls and 90 Level 2 stalls. In a September 2020 announcement, the company said it is converting its network to pay-per-kWh pricing and that it "expects to install or have under development approximately 800 total charging stations with about 3,500 DC fast chargers by December 2021."

Electrify America forms the core of Ford's FordPass Charging Network, which aggregates access to pay-as-you-go charging stations without requiring individual subscriptions. It also includes onboard software that can help plan a trip by identifying charging points along the way.

Another large player, the Silicon Valley-based Chargepoint, said earlier this year that it plans to spend $1 billion over the next decade adding charging infrastructure at 4,000 travel plazas and truckstops nationwide.

There are a variety of other charging options, some free and slow, others expensive and also slow. (The PlugShare network offers a community-based tool where EV owners can share information about charging locations.)

The bottom line? If you plan to use your BEV for commuting and local driving only, you can take your pick of vehicles and charge it at home. As soon as you hit the open road, though, you'll appreciate the global coverage that Tesla offers. And it's hard to imagine that any competitors can keep up as Tesla expands.

Join Discussion for: How to choose an electric car (spoiler: it...