How to use an iPad Pro to power your home office

I do a lot of my daily work on the iPad Pro. Whether it's writing a post like this one, monitoring my emails, editing photos or triaging Slack messages — it's an invaluable tool in my workflow. In fact, I prefer working on my iPad Pro over my MacBook Pro and any Windows laptop I have access to.

I've spent months working on refining my ideal iPad Pro work setup, testing various products until I was able to find what works for me. Below is everything I'm currently using, with an added bonus of a few recommendations at the bottom of gadgets I've tested and enjoyed as well.

It's the best iPad Pro I've used yet

When Apple updated the iPad Pro to include its Apple Silicon M1 processor, I jumped all over it. I hadn't updated my iPad Pro in a few years and after being thoroughly impressed by the performance of the M1-equipped MacBook Pro, there was no doubt the M1-powered iPad Pro would be my next purchase.

I opted for the cellular model with 1TB of storage and 16GB of memory for the added memory, not necessarily the storage. Although, I have to admit that I've begun to appreciate having the added space for storing random video files. The extra memory means that iPad apps can stay running in the background longer, and I'm not forced to refresh Safari tabs as often.

I also have a Magic Keyboard with Trackpad that I use when I'm away from my desk — it's a must-have iPad Pro accessory for someone who uses their iPad Pro as a laptop replacement.

USB-C and built-in speakers sold me

I've used several different external monitors with the iPad Pro, each of which required some sort of USB-C hub with HDMI or DisplayPort support, but I'm currently using the BenQ EW2780U Entertainment Monitor and can't see myself ever going back to a monitor that doesn't have a USB-C connection and built-in speakers.

iPadOS lacks true support for an external monitor, meaning that you're effectively just mirroring the iPad's screen when it's connected to another display. While it's annoying, and the picture is letterboxed (black bars on either side of the screen) on most external monitors, I've learned to live with it and found that having a "larger" iPadOS view is something that helps me get more work done.

What makes this monitor my favorite for the iPad Pro is the addition of built-in speakers. Whenever the iPad is connected to another display, it automatically switches its audio output to that source. That means it attempts to play your music and even alerts through the display, and if it doesn't have speakers, you don't hear a thing. You can change the output back to the iPad Pro's speakers, but it can be a hassle at times.

One of my favorite keyboards

I found that when I have the iPad Pro connected to an external monitor and I use the Magic Keyboard and Trackpad as my input device, I end up staring at the iPad Pro's screen instead of the bigger screen. So, to force myself to remember to look at the monitor, I move the iPad Pro off to the side on a stand (more on that in a minute) and use a wireless keyboard and trackpad.

The keyboard I've been using for the last few months is Logitech's MX Keys for Mac. I'm not a huge fan of the size of the keyboard — I'd love a TKL version of this keyboard that lacks the number pad — but I've grown fond of the battery life, and the layout that's specific to the Mac, which translates to being specific to the iPad.

The only thing I don't like about this keyboard is that not all of the media keys trigger actions on the iPad Pro. For example, the play/pause button works, but the track forward and back keys don't do anything. The same goes for the mute/unmute key — it works — but the volume up/down keys don't do anything.

Logitech does make a $99 TKL version called the MX Keys Mini for Mac but I haven't used it yet.

A wireless mouse works, but a trackpad is better

I've tried using different mice, both wired and wireless, and even though the iPad fully supports it, I prefer the experience of using a trackpad with the iPad Pro for one simple reason: Gestures.

Using Apple's Magic Trackpad with the iPad Pro means I can use the same multiple-finger gestures I use on the Magic Keyboard to navigate iPadOS. Tasks like accessing all of the apps I have in Slide Over, or quickly opening the multitasking view are easier, for me, to get done with a trackpad. I never could quite get the hang of moving the mouse cursor around on the screen and then clicking and dragging from various edges and corners of the screen to make a mouse work with iPadOS.

I've never been one to use monitor mounts, but Ergotron reached out to me a while back and asked if I wanted to test the Trace Monitor Mount. After some back and forth, I agreed to give it a chance and I'm glad I did.

Not only does it free up the desk space that a monitor's stand usually takes up, but it also makes it easier to adjust the viewing height and angle.

The Trace Monitor Mount has a cable management system built into it that's easy to change and swap out cords if you make frequent changes (like I do).

The only downside to the Trace Monitor Mount is its $399 price tag. That's a lot for a monitor mount, but if you're now working from home and your company is offering to help improve your home office setup, you may as well take advantage of it, right?

It looks like an iMac, but for the iPad Pro

Speaking of mounts, I've been using the Lululook Magnetic iPad Stand to hold my iPad Pro up higher off my desk while freeing up space that the Magic Keyboard would normally take up. It took me a few tries to get used to the best position for the magnets in the iPad Pro and the stand to line up, but now that I've got the hang of it, it's a quick process to switch between the keyboard and the stand.

The stand reminds me a lot of the iMac's stand and I'm not mad at that at all.

Sit or stand, it doesn't matter

Initial setup took a couple of hours to put the desk together, but it wasn't a difficult task by any measure. There's a programmable control panel that can store up to four different height adjustments — I currently have one programmed for my typical standing height, and another for when I want to sit down — along with buttons to adjust the desk.

My only gripe about the Flexispot control panel is that it's very sensitive to touch and I've accidentally brushed up against it more than once and had the desk adjust when I wasn't expecting it.

Flexispot has a bunch of different sizes, models and materials for you to pick from based on your budget.

As I said at the start of this, I've tested and used many different accessories with my iPad Pro setup over the last year or so. Below are some of my favorites, even though they aren't currently being used: 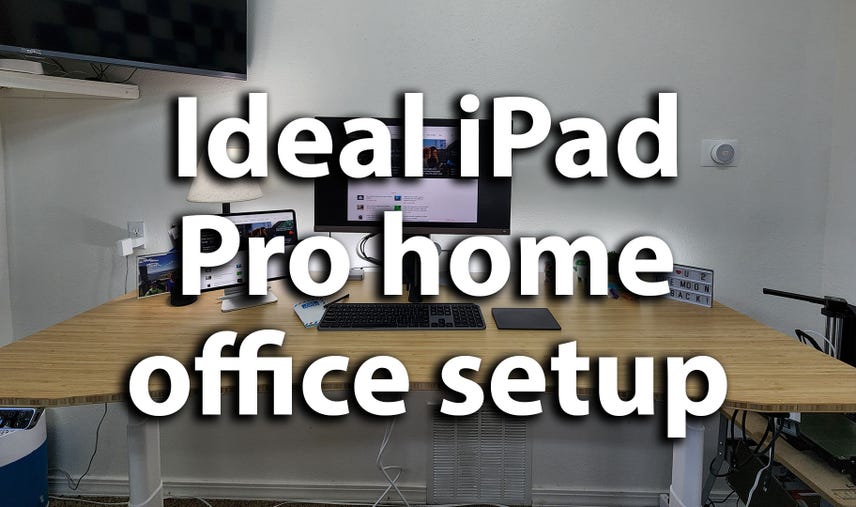 iPad
How to use Slack Themes to distinguish your workspaces

Collaboration
Getting an internship with a tech company: Your how-to guide