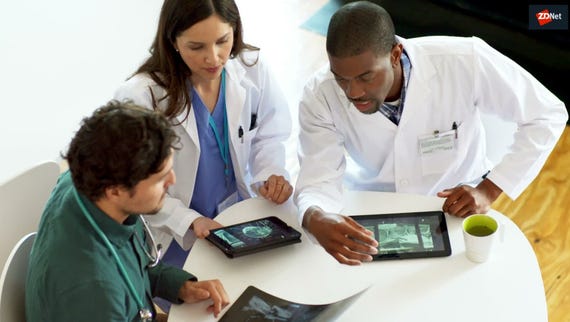 Parkinson's UK is using a combination of cloud computing and big data to drive a digital transformation across its business. Dodd says the data-led transformation means the charity can develop collaborative research into the condition and demonstrate the benefits to the people it serves.

"We work with lots of international organisations, such as pharmaceutical companies, charitable organisations and academic institutions," says Dodd. "Sharing data to help understand Parkinson's is really the crux of our work. Having access to technology that allows us to facilitate the sharing of data is crucial."

Dodd believes all organisations, regardless of sector, must consider a cloud-first strategy -- and that strategy extends to all types of provision, whether that's software, platform or infrastructure. "Any organisation that thinks it doesn't need to be in the cloud is misguided," she says.

"When we started our digital transformation programme, there was no part of our strategy that wasn't focused on looking for a cloud-based data management solution. The impact of the technology is such that it's tough now to think about how we ran our business beforehand."

Yet while the combination of big data and the cloud is producing positive results now, it wasn't always that way. A disparate collection of databases greeted Dodd when she joined Parkinson's UK in August 2016.

"We had a lot of data and it was very siloed," says Dodd, referring to a series of proprietary databases that lay scattered across the charity, such as those for supporters who donate money, customers who use the charity's services, and researchers who work with Parkinson's UK on a potential cure for the condition.

"It's a classic problem faced by charities," says Dodd. "Data emerges and is captured in systems organically. Then you reach a point where people recognise the power of data to help change your business for the better -- but that point is always realised after you've already captured the data in entirely the wrong way."

Dodd, formerly creative director at the BBC, recognised the charity needed a better way of managing its data. The implementation of the Snowflake data warehousing system has been core to this change in approach.

"Creating a joined-up approach to data has truly been a revelation for us," says Dodd. "There's very few conversations now that I'm in -- whether that's strategy or making serious business decisions -- where we're not talking about data. It has become a core part of the organisational vernacular."

Dodd refers to two key benefits from the implementation of cloud-based data warehousing. First, Parkinson's UK can focus on crucial data initiatives, such as how to share research insights with other institutions in real time. This collaborative way of working helps speed up communication around the condition and sponsors potential medical advances.

The second big benefit of the cloud-based approach, says Dodd, relates to data transparency. Parkinson's UK has used the technology to help remove siloes between different departments, to centralise its data into one single source of truth and to develop clarity around how its funds are deployed.

"It's not just about the money we bring in, it's also about the interactions with our supporters," says Dodd, who recognises the charity's effort to take tighter control over its data is timely, given the onerous obligations associated to the recently enacted General Data Protection Regulation (GDPR).

"GDPR has been a headache for us, like for all organisations. But it's also been a positive experience because we've had to think very carefully about how we interact with our supporters. It's allowed us to create a clear sense of who we have consent to talk to, when, and what sorts of things they want to hear from us," says Dodd.

Effective data management isn't just about providing benefits for donors -- there are internal plus-points, too. Dodd says the cost-effectiveness and scalability of the cloud means the IT team can focus on higher value development tasks, rather than spending time administering multiple databases.

"There's so many positives in terms of internal efficiencies, and those can make a real difference to our organisation," she says. "The cloud is the best way to deliver modern, scalable infrastructure. We still have a couple of on-premise servers that we haven't finished shutting down and transferring over yet. But our server room is already becoming a bit of a museum to our old way of working."

Progress, then, has been rapid. Yet Dodd has grander aims, suggesting there is still a large amount of important work to complete. "Having a great data infrastructure and then being able to use the data well once you have access to it, is an ongoing task that takes lots of time and effort. We're at least taking the right first steps on this journey," she says.

Dodd says this ongoing transition represents a considerable cultural transformation for the charity's workforce. Parkinson's UK has invested in data science training for staff members across all lines of business, rather than just the IT department. Dodd says this expertise can help the organisation meet its long-term aims.

"There's a big requirement for data capability and literacy across the business. These people, from areas like healthcare, HR and service delivery, are on a data fellowship where they're learning proper data science skills. We're making that investment in our people because we recognise how important it is," she says.

IT jobs: Five key skills you'll need to make it to the top

Getting ahead is about more than just tech skills, so how do you measure up?

If you're hoping to advance your career by taking on the role of CIO, be sure it's the right fit for you. Here are some aspects of the job you should weigh carefully before you jump in.

Join Discussion for: How to use cloud computing and big data to...