Before the operation, the doctor gets to view a bronchoscopy simulation based on the specific bronchial anatomy of the individual

Barcelona researchers have developed new software for lung biopsies, drawing on techniques from video games, augmented reality, and 3D modelling to allow clinicians to navigate through a patient's airways.

The technology they've devised relies on novel image-processing techniques and artificial intelligence, and helps medical staff to gather the tissue samples that are so important in the early diagnosis of lung cancer. 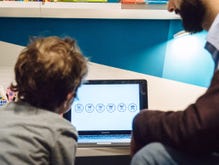 With millions of children suffering from the impact of perinatal strokes, a group of Italian researchers decided to turn to gaming tech to help provide therapy.

But the key point for doctors is that the technology doesn't require them to use new instruments or involve changes to their existing procedures.

The researchers also say it is quicker, more precise and effective, less invasive for the patient -- not to mention cheaper. That's a great step forward, says Antoni Rosell, pneumologist and researcher at Bellvitge University Hospital.

Rosell is part of the team of researchers from the Autonomous University of Barcelona (UAB), the Barcelona Computer Vision Center (CVC), and the Bellvitge University Hospital, who have developed this technology, which helps lung specialists prepare biopsies with precision.

They can plan out the route they will take to a lesion located in or next to the bronchial tree, and even choose the best tool to obtain a sample, whether that might be forceps, brushes, or needles.

Before the intervention, the doctor gets to view a bronchoscopy simulation based on the specific bronchial anatomy of the patient, thanks to advanced the image-processing methods and 3D modelling techniques used in video games. This simulation is an exact virtual representation of the patient's lungs.

Then, when the doctors are conducting the biopsy, the technology uses video processing and AI to reproduce the planned path from the simulation, helping to guide them in real time to the lesion.

The patient doesn't need any special preparation, just a CT scan which is used to model their bronchi as a set of 3D vertices and triangles, explains Dèbora Gil, mathematician and researcher at CVC as well as lecturer in computer science at the UAB, who coordinated the research.

This map of the organs not only facilitates the process and reduces cost in terms of time and effectiveness, but can also drastically reduce the number of failed interventions, she adds.

The technology has other applications, such as calculating any narrowing of the windpipe, known as a tracheal stenosis, in just a few seconds.

It also helps identify any shortcomings in the instruments, particularly the mechanical limits of the bronchoscope, which can make reaching some lung areas for a biopsy very difficult to reach.

"It will allow us to design the bronchoscope of the future without unnecessary tests," Rosell says. The technology could also be developed further as a guide in other endoscopic interventions, such as colonoscopies or laparoscopies, he adds. More than that, it could help train young specialists, without having to try out their skills on real patients.

For the moment, the system is in a pre-commercial phase, so it has not yet been rolled-out to hospitals. Bellvitge Hospital in Barcelona is expected to be the first to have access to the final version of the technology.

"Our approach goes beyond this software. While Lungpoint needs manual corrections during the guidance process, our system incorporates automatic corrections. On the other hand, our software can also check the feasibility of the instruments to do the biopsy," Rosell says.

"Any improvement that brings more accuracy, precision and speed to the process and put patients at ease is good for them and for the efficiency of the health system."