"Hey there! You found us," read the first five words of a secret Apple job listing.

The job listing was posted on one of the company's publicly accessible but hidden servers, hosting data on millions of Apple customers across the US east coast. 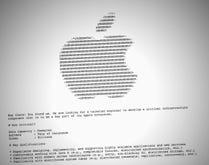 ZDNet spoke to four security experts for their top advice in getting into the infosec world.

According to the job listing, Apple was "looking for a talented engineer to develop a critical infrastructure component that is to be a key part of the Apple ecosystem."

In fairness, Apple is not looking for me, but someone who's far smarter and qualified, and who has better office etiquette.

I tweeted out a screenshot that quickly got picked up by several Apple-focused blogs, none of whom were able to spell my name correctly, nor asked how the page was found in the first place.

But several people on Twitter did ask, so I'll explain.

I was using Burp Suite, a traffic analyzer, to intercept data between several iPhone apps to see what kind of personal data was sent along to advertisers. Among the stream of connections to analytics sites and advertisers used to track a user's app consumption, there were several outbound connections to one of Apple's "blobstore" servers, which the company uses to host iCloud data, such as customer photos and videos.

I entered the web address into a browser, and there you have it.

Trust me, there was little proficiency needed to find the page, which, since it was widely reported, has been taken down.

But it was still nice to have been asked to "get in touch" with my resume.

Join Discussion for: How we found that hidden Apple job listing