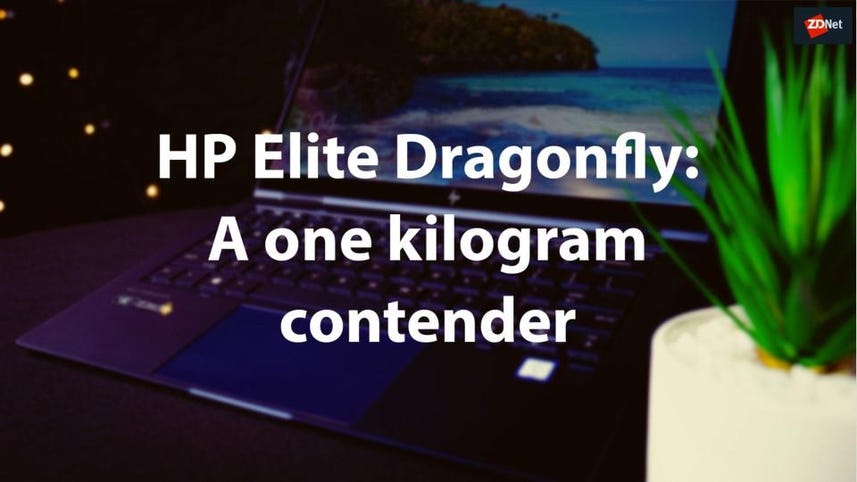 The HP Elite Dragonfly is a business 2-in-1 with a single pitch: It is light.

This claim is certainly true, it is one of the lightest laptops I've come across recently, and could easily be the lightest. But don't get too distracted by the weight statistics bandied about. HP says its weight starts from 0.99 kilograms, so chances are the Dragonfly you come across will be over the 1kg mark. Either way, it's light.

When the laptop was announced, it arrived with a set of criteria to get the Project Athena sticker: Under a kilo, all-day battery life, Wi-Fi 6, and packed with a quiet keyboard as a bonus.

In handling this 2-in-1 for a couple of weeks, I feel I'm able to make a call on this list.

Lightness we've addressed; all-day battery life might be possible if the screen brightness is turned down and the device is not pushed too hard, because it only lasted 5 hours while playing a Youtube video on Windows 10's medium brightness setting; Wi-Fi 6 is fine, but doesn't help when the rest of the infrastructure in the office is from a decade ago; and as for the quiet keyboard, yes it is quiet, but it's not as though modern laptops such as the ThinkPad X1 Extreme Gen 2 are packing mechanical keyboards.

At the time of writing, you could head to HP's Australian site and pick one up for AU$3,400, but at the same time, there was a model with a Core i7 available for AU$5 more, or AU$180 more, when the special ended. So the i5 version is very weirdly positioned, at least from a pricing point of view.

To add further to the pricing issue, you would need to spend over AU$4,000 with HP to get a version of the laptop featuring a 3840x2160 pixel display.

The review unit we had arrived with HP's Sure View privacy mode for the display. This was a first for the Sydney office and we were eager to give it a try. In short, it works, but only if the people trying to view your screen are around 80 degrees either side of the display. Any straighter than that, and chances are, Sure View will not stop a shoulder surfer.

Beyond Sure View, there were other HP additions, in the form of software, that were less than welcome. The Elite Dragonfly will annoy you to enter warranty information; there are startup applications that most users would not know about -- that would be you, HP WorkWell; and yet, it offers services like HP Sure Sense which could be useful as a malware protection service. It really is a mixed bag of software additions.

Much like the animal it is named after, the Dragonfly is a hard animal to capture. If you want lightness and decent silicon, and can cop the price, or your IT department can, then you'll be happy. If you can live with an Arm chip, you could have an even lighter and longer-lasting experience.

Otherwise, you've got to decide if a 2-in-1 that does a lot of things well, but not that much better than its competition to be remarkable, squares away with the price HP is offering. But at the same time, that seems to be the decision with most PC hardware in 2020.

See it at HP