If you've been waiting for a successor to Microsoft's Surface Pro 4 -- and since it was released at the end of 2015, you have been for a while -- there's been no shortage of alternatives. But if a Surface Pro 5 is unlikely to "surface" (pun intended) anytime soon, as ZDNet's Mary Jo Foley speculates, HP has just launched a very appealing 2-in-1 that should demand your attention. 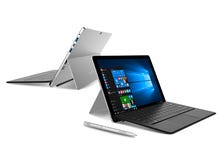 Chuwi has unveiled a Surface Pro 4 clone, but one that features Intel's lower-end Apollo Lake processor.

The updated Elite x2 1012 G2 outdoes the Surface Pro 4 in many areas. At just 0.36 inches thick, it's skinnier than Microsoft's convertible, and it packs the Intel Kaby Lake processors that weren't available when the Surface Pro 4 was rolled out. HP's also addressed one of the original Elite x2 1012's shortcomings, boosting the resolution and size of its touchscreen display from 1,920x1,080 to 2,736x1,824 and 11.6 inches to 12.3 inches, which now match the Surface Pro.

HP's hybrid has a couple of further advantages over the latest Surface Pro. It's built to MIL-SPEC rugged standards, and also includes the HP Collaboration Keyboard and a Wacom digital pen. The company makes it easier to open up the device for repairs/upgrades than the notoriously clamped-down Surface Pro hardware.

One area where the Surface Pro 4 still has an advantage is in base price. You can pick up the cheapest Surface tablet for $799, while the base Elite x2 starts $300 higher. You don't get a keyboard or pen with the base Surface Pro 4, however, and you're stuck with an Intel Core m3 processor instead of a more powerful Core i3. But you'll still have to wait a little bit even for the new Elite x2 1012 G2, as HP says it will be released in July.