HP has unveiled its new Pavilion PC range, which comes with a particular focus on lightweight, mobile designs, alongside the more traditional desktop offerings.

The convertible and notebook Pavilion models are said to offer longer battery life and a more compact size along with more power and performance and a more environmentally friendly energy consumption.

Heading up the range is the HP Pavilion x360 convertible, a device with 360-degree hinge allowing it to be used as a laptop, a tablet or anything in between. The design has been built to "meet customers' increased desire for more mobile solution" while offering the performance of a laptop, HP said. 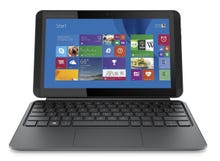 Those looking for an inexpensive 2-in-1 Windows laptop that is well-equipped for running Windows 10 should take a look at this model from HP.

Depending on the model, the x360 is powered by the latest Intel Celeron, Intel Pentium or 6th Generation Intel Core i7 processor and comes with up to 16GB of memory, up to 512 GB SSD and the option of up to 1TB of hard drive storage. The HP Pavilion x360 is priced at a starting point of $379.99.

Accompanying the x360 in HP's new mobile computing offerings is the HP Pavilion laptop, with models available with 15.6-inch and 14-inch screens -- but up to 22 percent thinner than HP's previous laptop offering.

The device also offers up to 16GB of memory, up to 512GB SSD, and up to 2TB of HDD, along with an optical disk drive on selected models. HP Pavillion Laptops will start at $579.99 when they're available for order later this month.

The HP Pavilion Desktop is exactly what the name suggests -- a desktop PC tower which offers greater storage and graphics options than its laptop counterparts. It comes with up to an Intel Core i7 processor, with a variety of NVIDIA and Radeon graphics card options.

The desktop also comes with up to 16GB of memory and up to 3TB of storage and offers support for two displays. The HP Pavilion Desktop is planned to be available on from 26 June at a starting price of $449.99.

Finally, with a digital display of up to 27 inches, the HP Pavilion All-in-One is a PC designed to provide users with a big screen they can take advantage of, be it for business or leisure activities. Like HP's other new devices, the All-In-One comes with various options of processing power and storage, as well as offering Intel RealSense Camera to provide enhanced security via facial recognition and gesture control.

"Some customers want thin and light PCs for on the go while other customers want power and performance to create and store," said Kevin Frost, vice president and general manager og consumer personal systems at HP Inc.

"HP's redesigned Pavilion PCs offer affordability and a variety of options for customers to get the functionality they need in a PC packed with style and personality," he added.